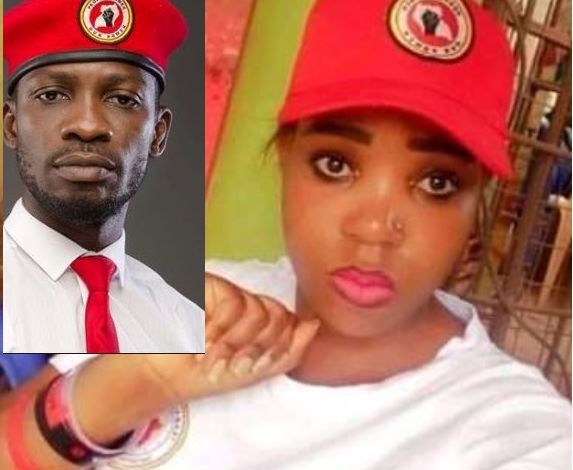 By Elite Reporter
Officers of the Uganda Police Force on Monday afternoon fired teargas and bullets as they tried to disperse irate People Power supporters from  Mulago City Mortuary,  demanding for the body of their colleague identified as Ritah Nabukenya, who was on Monday morning knocked dead by a police patrol truck.

It is alleged that Nabukenya was knocked dead by a Police patrol truck on her way to Nakawa Court to attend People Power leader Robert Kyagulanyi alias  Bobi Wine’s OTT case.

She died at Mulago Hospital where she had been rushed. She was dressed on People Power attire at the time of her demise and some People Power supporters are alleging that she was intentionally knocked because of being a supporter of People Power, a political pressure group led by Bobi Wine.

“A very sad day! Yet again, police have murdered one of our solid leaders of the People Power Movement. Police saw Rita Nabukenya wearing People Power colours on a boda boda, run after her with a police patrol truck and knocked her dead,” Kyagulanyi said in a statement that prompted People Power supporters to gather and head to Mulago City mortuary, where they met stiff resistance from police.

However, the police have since issued a statement denying having knocked Nabukenya.

A statement released by the Uganda police about the tragedy reads in part that “Early this morning at Nakawa, two motorcycles knocked themselves, a woman fell off and this incident was near a Police 999 patrol car UP4841. The woman later died in Mulago. The People Power are confusing the public that it’s the Police vehicle which knocked whereas not. The Police vehicle took the victims to Mulago where the woman died. Traffic is completing the analysis. Details to follow.”

Assistant Inspector General of Police Asan Kasingye has since asked People supporters to wait for the CCTV clips before blackmailing Police.

In a message he posted on his personal social media platform, Kasingye said they (Bobi Wine and group) should wait for a CCTV clip which shows that Nabukenya was a victim of a road accident. He says a Police truck just helped to rush the deceased to Mulago Hospital for treatment but she died on the way.