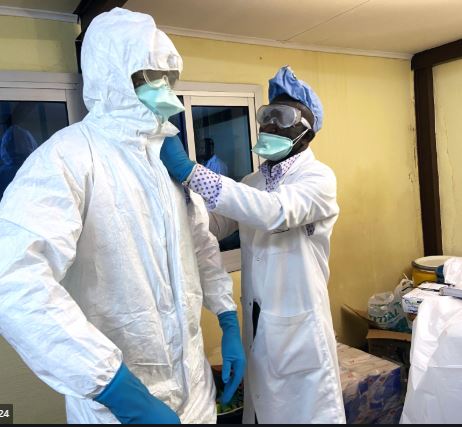 Panic and fear have engulfed the nation after the Ministry of Health confirmed two cases of Coronavirus infections in Uganda.

According to Ministry officials, one of the patients is Ugandan who is a resident of Kakungulu zone, in Kibuli, Kampala,  who recently returned from Dubai, where he had gone  purchase merchandise for his shop.

Dr. Jane  Ruth Acheng, the Minister for Health said Saturday evening that “Uganda has confirmed her 1st case of #COVID19, today. This is a 36 year old Ugandan male who arrived on 21 March 2020 at 2:00am.

During the screening process at the airport, his temperature was 38.7. This prompted health teams to isolate him at the airport for further follow up.”

She added that “The patient is currently isolated at Entebbe Grade B Hospital and his health condition is stabilizing.”

This website has also learnt that the second patient is  Rwandan national identified as Mushiyimana Delphine who fled from quarantine in  Kabale district.

It is said that Mushiyimana sneaked into Uganda early this week from  Kigali, where she was staying with a friend, who had tested  positive with Coronavirus.

When health officials and security personnel apprehended her friend, Mushiyimana escaped and entered Uganda through Kabale district where she was put into quarantine, but she ended up escaping and is somewhere amongst the community.

However, although it is not yet clear how she escaped under tight security Atek Kagirita, a health official in Kabale district, said that; ” We have engaged the police, military and health ministry officials to hunt her down, such that she can be isolated.

The President  issued directives banning all flights, travel by water, railway or road. According to the directive, only cargo flights will be allowed at Entebbe International Airport and trucks carrying merchandise into Uganda are also prohibited.