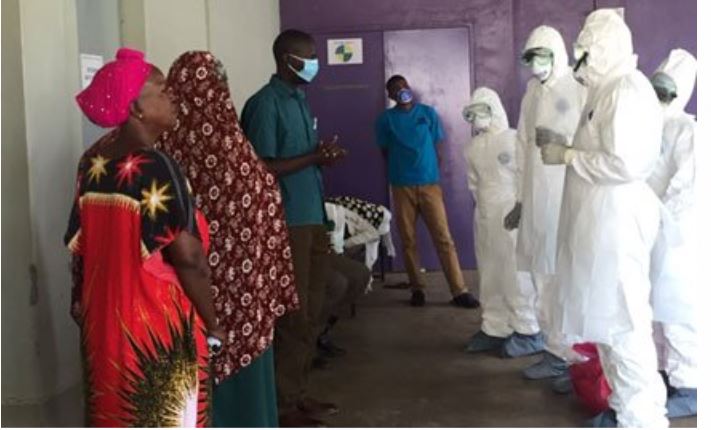 Untold panic has gripped residents of Entebbe, Wakiso and surrounding areas after news circulated that the Patient who had been quarantined at Entebbe Grade B Hospital after contracting Coronavirus has since disappeared.

Our Spies at Entebbe Grade B Hospital reveal that the Patient might have disappeared in the middle of the night, because by Monday morning when medics went  to administer medication on him he was nowhere to be seen.

They add that medics and security officials at the Hospital immediately launched a hunt for the Patient but he was nowhere to be seen and they have since notified the public to ensure he is arrested and taken back into isolation, because he poses a huge risk to the lives of  other Ugandans.

The minister of health Dr Jane Ruth Aceng announced  on Saturday evening that Uganda had registered the first Coronavirus infection, a resident of Kakungulu zone in Kibuli, Kampala, who recently returned from Dubai, where he got infected.

Dr Aceng also revealed that the Confirmed Case (Patient) had been islolated and quarantined at Grade B Hospital,  where his health condition was stabilizing.

However, news about his alleged escape is bound to spark of fear among several Ugandans, who might get infected unknowingly.

By the time of filing this story our efforts to get a comment from officials at the ministry of health were still futile, since their lines were constantly busy.  But we shall bring you updates in our subsequent reports.

Meanwhile, health authorities in Masaka District have quarantined seven people at Masaka Regional Referral Hospital who reportedly entered into the country from United Arab Emirates (UAE) through Entebbe International Airport, but were never screened for COVID-19.

The head of the emergency department at Masaka Hospital, Dr Mark Jjuuko, said those placed under quarantine are all Ugandans – three men and four women.

He said they  have drawn blood samples from them and sent to Uganda Virus Research Institute in Entebbe to ascertain whether they have Coronavirus or not .

“We expect results within 24 hours. From our interaction with them, some claim they have been doing self-isolation at home and other family members could not be at a risk,” Dr Jjuuko said on Sunday evening.

Herman Ssentongo, the Masaka Resident District Commissioner, said they picked some of the people from their homes around Masaka Town after being tipped off by residents.

“One of them [travellers] was heard telling a colleague that when one pays some money, he can easily dodge the quarantine at Entebbe and go straight to the village and that is what he exactly did,” he said.

According to the Ministry of Health guidelines, all travellers mostly those from countries that have already recorded cases of COVID -19, are required to undergo mandatory 14-day quarantine at designated areas at their own costs.

Those quarantined in Entebbe hotels reportedly pay $100 (about 375,000) per day, which some have already complained that  it is very expensive.

A husband to one of the four quarantined women who is a resident of Nyendo, a Masaka Town suburb, said when his wife arrived from Dubai two weeks ago, she had flu and malaria and her situation worsened.

“She was first admitted to Kitovu Hospital, but I was not contented with the care being given to her, so I decided to bring her to a referral hospital here,” the husband, who preferred anonymity, said.