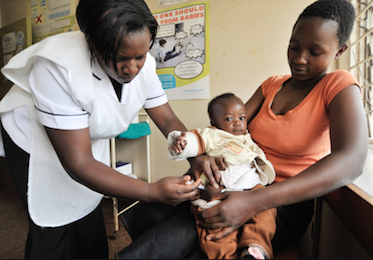 Gulu District Health Department has immunized 19,300 children below the age of five years against measles-rubella.
The six days immunization drive was conducted in primary and nursery schools, and health facilities in the 11 sub-counties of the district.

Dr. Kenneth Cana, the Gulu District Health Officer said on Friday that they have hit their set target of vaccinating over 19,000 children. He says initially, they had targeted vaccinating a total of 19,668 children in the one-week drive.

“Overall, we achieved 98 percent of the target we were meant to get,” says Dr. Cana.
Dr. Cana lauded parents for embracing the vaccination drive, arguing that such a gesture will help in fighting the disease in the region.

He however says the district has registered two cases of measles in Oroko village, Palaro sub-county, but notes that the cases are under close management by health workers.

“There are two cases we have registered in Palaro sub-county, but are being managed, we have also intensified surveillance in the community to reduce risks of spread to other areas,” he said.

According to statistics from the district health department, Paicho sub-county registered the highest number of children immunized at 2,609 followed by Bungatira sub-county at 2,426. Other best-performing sub-counties are Patiko where 2,257 children got immunized, Palaro with 2,153, Awach with 2,125, and Omel with 1,583 children vaccinated.

The Gulu District Health Educator, William Onyai noted that prior sensitization of the mass vaccination enabled them to achieve their set target. He says they faced less resistance from parents in the community about the vaccination, arguing that the same spirit should be extended to other health drives rolled out by the government to tackle killer diseases among children.

The just-concluded mass vaccination drive follows the recent outbreak of measles-rubella in parts of the Acholi sub-region and other areas across the country.

For instance, in Lamwo district, a total of 79 tested positive for measles following its outbreak last month. At least 10,000 children were also vaccinated in the district during the same period.