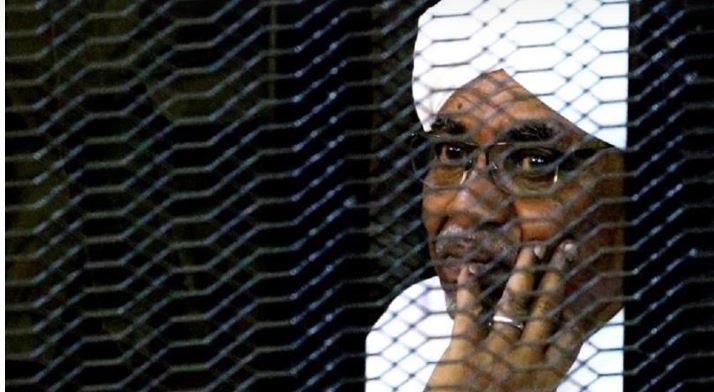 Former Sudan president Omar Al-Bashir, is currently facing trial for crimes he and others committed during the 1989 coup de’tat which saw him take over power from his predecessor Prime Minister Sadiq al-Mahdi.

Al-Bashir, who was overthrown last year by the military in the face of mass protests against his rule, is on trial in the capital Khartoum, over his role in a coup that brought him to power over 30 years ago.

Al-Bashir, who has been jailed in Khartoum since his overthrow, faces charges of undermining the constitution, violating the Armed Forces Act and fomenting a coup in 1989 against the democratically elected government of Prime Minister Sadiq al-Mahdi.

Before any statements or evidence could be given on Tuesday, the trial was adjourned until August 11 to reconvene in a bigger court to allow more lawyers and family members of defendants to attend.

Some lawyers had complained that their colleagues had not been able to get into Tuesday’s session.

Other defendants include 10 military personnel and six civilians, including his former vice presidents, Ali Osman Taha and Bakri Hassan Saleh, as well as former ministers and governors.

They are all accused of having plotted the June 30, 1989, coup during which the army arrested Sudan’s political leaders, suspended Parliament and other state bodies, closed the airport and announced the putsch on the radio.

The man dubbed the true brain behind the military coup, Hassan al-Turabi of the National Islamic Front, died in 2016.

Al-Bashir stayed in power for almost 30 years before being overthrown on April 11 2019 after several months of unprecedented, pro-democracy demonstrations that eventually forced the creation of a joint civilian-military ruling “sovereign council”.

The 76-year-old is also wanted by the International Criminal Court (ICC) on charges of genocide, war crimes and crimes against humanity for atrocities committed by pro-government forces in Darfur.

Sudan’s new governing authorities, which are tasked with leading the country to elections under a 39-month power-sharing agreement, have yet to hand him over to the ICC for prosecution.

Al-Bashir is also being investigated over the killing of protesters while, in December, a Sudanese court handed him a first, two-year sentence on corruption charges.

Ahead of Tuesday’s trial, Moaz Hadra, one of the lawyers who led the push to bring the case to court, said al-Bashir and Saleh “have totally refused to cooperate with the commission of enquiry, but they will be present at the court”.

Hadra told the press that the accused are charged under crimes including Chapter 96 of the 1983 Penal Code, which had been abolished by al-Bashir, and which carries the death penalty for attempting to destroy the constitutional order.

The lawyer said “this is the first time someone who launches a coup will be brought to justice” in Sudan, which has seen three coups d’etat since its 1956 independence from Britain.

“This trial will be a warning to anyone who tries to destroy the constitutional system,” he added. “This will safeguard Sudanese democracy. In this way, we hope to bring an end to the era of putsches in Sudan,” Hadra warned.

One of the 150 defence lawyers, Hashem al-Gali, charged that Bashir and the others would face “a political trial” being held “in a hostile environment on the part of the judicial system against the defendants”.

“In fact, this trial is aimed at the Islamic movement, and its sole purpose is to present it as a terrorist movement, but we have prepared our defence, and we will prove the contrary,” Gali said.

He argued that al-Bashir’s overthrow of Mahdi took place so long ago that it was beyond the statute of limitations and should therefore no longer be dealt with by a court.

The trial takes place at a time when Sudan’s joint civilian-military transitional government is introducing a host of reforms and has relaunched peace talks with rebel groups.

Sudan hopes to soon be taken off the US State Department’s list of state sponsors of “terrorism”, a major hurdle to receiving foreign aid and investment.