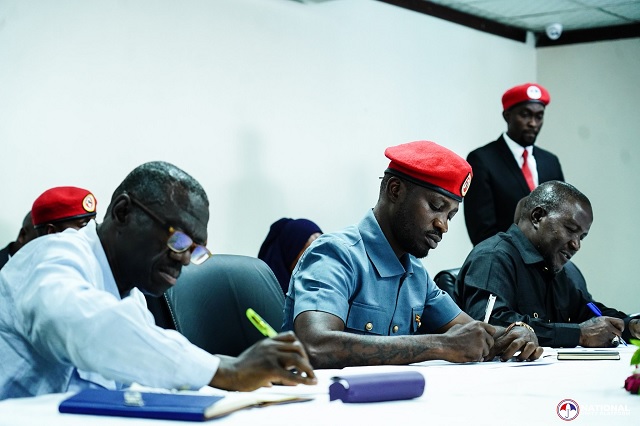 Opposition leaders have signed yet another agreement to foster cooperation amongst themselves in any upcoming elections and other efforts geared towards ousting President Yoweri Museveni from power.
The agreement which was signed during a meeting held at Hotel Africana on Monday afternoon attracted leaders of four political parties including Forum for Democratic Change-FDC, National Unity Platform-NUP, Justice Forum-JEEMA, People’s Progressive Party-PPP and People’s Front for Transition.
In their joint statement, which was later read by the NUP Secretary General David Lewis Rubongoya, opposition leaders noted that the recent blatant election cheating, particularly in the by-elections staged in Kayunga, Omoro, and Soroti, served as the impetus for the new agreement.
“In all the last general or by-elections, several political parties and formations have continuously participated with belief in democracy and rule of law as the modest means through which they could achieve a peaceful transition for the nation and change of leaders at lower levels…unfortunately, the quality of elections has now gone from bad to worse-each election being worse than the previous one,” the joint statement reads in part.
After giving the background to what happened in the recent three by-elections, the leaders on behalf of their political parties and formations, noted that going forward they will unite to defeat their common enemy. “Going forward, we shall jointly or severally use any upcoming elections to organise and rally the population to defend their democratic rights and the election madness that has bedeviled the country since independence,” the statement states.
In the most recent by-election, members of the National Unity Platform and the Forum for Democratic Change teamed together to support Attan Moses of the FDC on the final day of the campaign, highlighting the need for the opposition to unite and unseat President Museveni. However, their candidate didn’t benefit from their last-minute pitch.
Erias Lukwago, the vice president of the FDC in the central region, committed FDC to the agreement and stated that they are prepared to do all within their power to oppose Museveni, whom he referred to as a tyrant, as long as doing so is lawful.
Lukwago said that the NRM leaders’ behaviour amounted to treason thus urging the oppressed Ugandans to band together, support the opposition leaders in this new pact, and use the legal authority granted to them by the constitution to overthrow the ruling party.
Dr Kizza Besigye, the leader of the People’s Front for Transition, was more than happy to learn that opposition leaders are now accepting that participation in elections might not cause the much-desired change in Uganda.
Besigye, who is a four-time presidential candidate, pointed out that the NRM administration organizes only as a window show to legitimize their stay in power saying they are being given the mandate by the population and that incidentally, the opposition has over time participated thus adding a stamp to legitimate the process.
According to him, the time for bemoaning arrests and vote-stuffing during elections has passed. The former FDC party president further called upon the unified forces of opposition to organize, spread the word about how to obtain one’s freedom and direct people toward taking appropriate action to obtain what they are due.
Dr Besigye also used the podium to rally fellow leaders and the citizenry on what he described as an economic crisis that is making it hard for people to thrive thus calling upon all those who are oppressed by the situation to raise and take part in a struggle to shift power from the government that captured it with guns.
Robert Kyagulanyi, the NUP party president also noted it is high time they did something to change this situation that he said is worrying. Kyagulanyi, who squarely agreed with Besigye that election might not cause regime change, noted that they should however participate in them to get a chance to sensitize their supporters.
Kyagulanyi also used the chance to call upon NUP and FDC members to stop creating an imaginary rivalry between him and Dr Besigye but rather unite given the fact that they all support leadership change.
The new opposition agreement was signed barely days after the Democratic Party-DP leadership signed a working cooperation agreement with the ruling National Resistance Movement-NRM. In the 42-clause agreement, the two parties not only agreed to share political power but also to foster constitutionalism and respect for human rights.
However, Besigye pointed out that Mao’s action won’t produce any results since an agreement with the NRM and President Museveni in particular can’t bring about change in Uganda.
This is not the first time that opposition parties are forming coalitions or signed agreements. Since pre-independence days, opposition parties have always been attempting to join efforts as one of the collaborative means to defeat those in power. However, each time they failed immediately, or the new fronts they formed limped around before collapsing.
Under Museveni’s rule for instance, the opposition tried to unite under one umbrella before the electoral year all in vain. The coalition formed for the same purpose in 1996 is the Inter-Party Forces Coalition-IPFC, The Group of six political parties and organizations (G6), and The Group of Seven political parties and organizations (G7). Others are the 2011 Inter Party Coalition-IPC and very recently The Democratic Alliance-TDA ahead of the 2016 general election.
Just before the recently concluded general election, opposition political parties under their Unity in Diversity (UID) Forum convened by former presidential candidate Paul Kawanga Ssemogerere signed an agreement to work together during and after the elections but the agreement was never implemented.
In light of this, Asuman Basaalirwa of JEEMA and Saddam Gayira of the PPP hoped that this time the leaders would do more than just sign agreements, instead they put their promises into action.