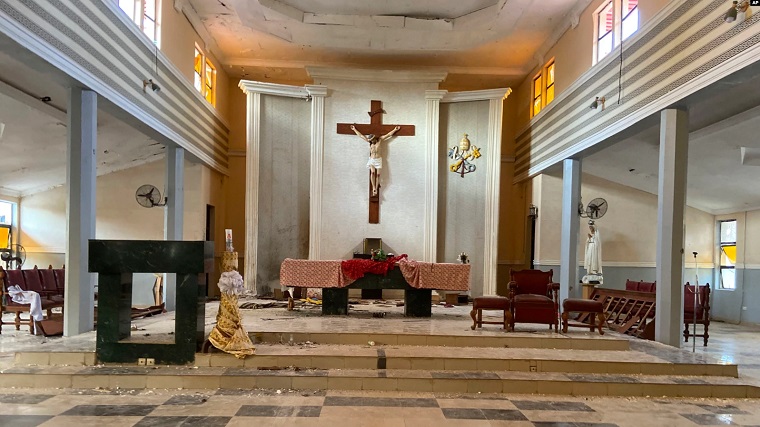 At least 50 worshippers were killed in an attack on a Catholic church in Nigeria on Sunday.

The attackers targeted St Francis Xavier Catholic Church in Ondo state just as the worshippers gathered on Pentecost Sunday, with gunmen opening fire and detonating explosives. Children were among the dead.

The Vatican said that Pope Francis “prays for the victims and for the country, painfully attacked at a time of celebration, and he entrusts everyone to the Lord, that God might send His Spirit to console them.”

“It is a black Sunday in Owo. Our hearts are heavy,” Ondo Governor Rotimi Akeredolu tweeted Sunday. “Our peace and tranquility have been attacked by the enemies of the people.”

The governor was away in Abuja, taking part in his party’s primary elections ahead of next year’s polls but suspended his activities and returned to Ondo hours later with state security officials. Akeredolu said that the attackers would be hunted and prosecuted. He also urged residents to remain calm and not resort to retaliation. There has been no claim of responsibility for the attack.

Adelegbe Timileyin, who represents Nigeria’s lower legislative chamber, said at least 50 people had been killed, while others said the figure would turn out to be higher. Video footage of the scene showed worshippers lying in pools of blood as people around them wailed.

It was not immediately clear who was behind the attack. While much of Nigeria has struggled with security issues, Ondo is widely known as one of Nigeria’s most peaceful states. The state, though, has been caught up in a rising violent conflict between farmers and herders.

“In the history of Owo, we have never experienced such an ugly incident,” said lawmaker Oluwole. “This is too much.”

Church officials said many of the wounded were fighting for their lives in hospitals. Some residents launched a blood donation drive to help them. Nigeria is currently facing a wave of violence by armed gangs. A week ago, the prelate of the Methodist Church of Nigeria, Samuel Kanu Uche, was kidnapped on his way to the airport in southeastern Abia state.

He was released two days later after the church raised about $240,000 and paid the kidnappers.