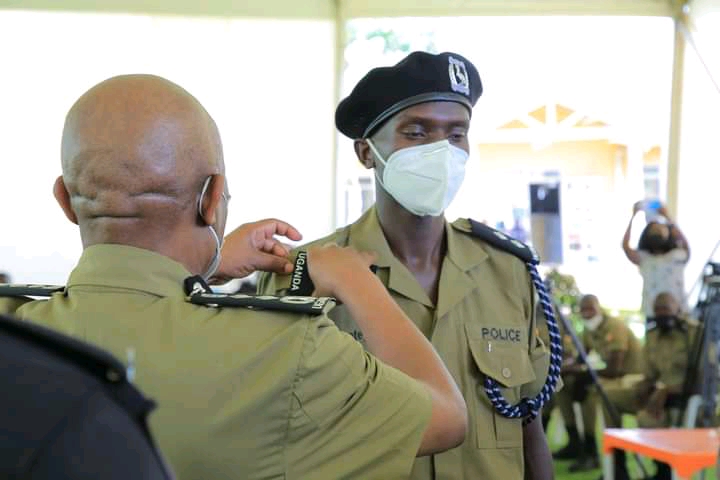 The Tokyo 2020 Olympics gold medalists Joshua Cheptegei and Peruth Chemutai have been promoted by The Inspector General of Police, Martins Okoth-Ochola, Cheptegei has been promoted from Inspector of Police (IP) to Assistant Superintendent of Police (ASP) while Chemutai who was first regraded from Special Police Constable (SPC) to Constable has been promoted to Inspector of Police (IP).
Cheptegei won a gold medal in the 5000m race while Chemutai scooped gold in 3000m steeplechase. Ochola in his message to the newly-promoted police athletes said it was an honour to celebrate the success, jubilation the team brought to the country.
Ochola said police management organised the event to celebrate the outstanding achievement that brought the country together at the time it was needed.
“Even those who did win at least showed the spirit of competition and will be victors next time,” Ochola said.The IGP also promoted the police athletic coach Benjamin Njila from IP to ASP.
“Use your ranks to lure youths from engaging in criminality but into constructive work like sports, for any competitive game it’s not about who runs fastest but the teamwork,” Ochola said. “To the coach, I say thank you for preparing the team!”
Peruth Chemutai being pipped
Others promoted include Mercyline Chalangat promoted from AIP to Inspector, Constable Shida Remy has been promoted to AIP. The team coach ASP Njila applauded the IGP for donating the Double Cabin vehicle and a coaster bus to transport athletes for their training sessions. AIGP Jack Bakasumba asked Cheptegei and his newly promoted officers to entice young people to join the police sports team.
It took Uganda 40 years from Akii Bua’s 1972 win to get another Olympic Gold medal in Stephen Kiprotich’s win in London 2012, and another nine years for Chemutai and Cheptegei to win more Olympic gold in Tokyo 2020 (held in 2021).
The head of police sports department AIGP Andrew Sorowen said people were working hard to ‘steal’ their athletes but warned that they were more than ready to provide conditions that keep them in the force

By virtue of the promotion, Cheptegei and Njila are now in senior police officers category and they have a salary of at least Shs 670,000.