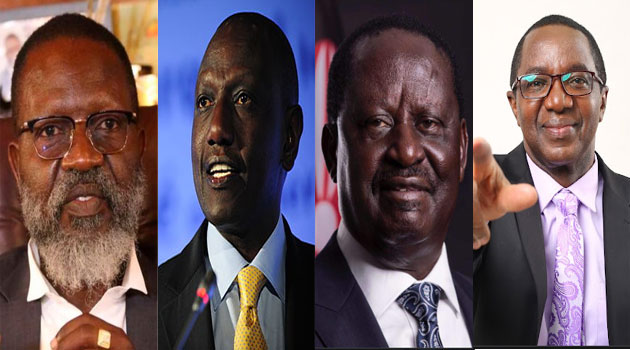 An opinion poll on Kenya’s presidential election shows former prime minister Raila Odinga leads the battle.
According to the survey released on Tuesday by the Ipsos group, 47% of respondents said they would vote for Odinga in next week’s presidential election. Kenya’s deputy president, William Ruto, was second at 41%, with George Wajackoya and David Mwaure a distant third and fourth respectively.
Nine per cent of voters were undecided. Under Kenya’s election system, a candidate needs to win 50% of the vote plus one to be declared the winner and avoid a runoff.
“Should Raila convert half of the undecided voters he will win this election first round. If Dr. William Ruto converts 100 percent of the undeclared vote, he will force a re-run,” said Samuel Muthoka, the East and Horn of Africa director at Ipsos.
Another recent survey by Trends and Insights for Africa (TIFA) found that Odinga was the most preferred candidate at 46.7%, while Ruto polled at 44.4%. The Ipsos survey, taken between July 23 and 30, shows Odinga’s sweet spot is his legacy as a democratic and experienced leader, while those who support Ruto believe he presents hope with a clearer plan for the country’s future.
Odinga’s age and Ruto’s integrity issues are their major drawbacks according to the polls. Odinga is 77 years old while Ruto is accused of multiple corruption issues. Muthoka says the election comes down to a few geographic areas, including major population centers in Mombasa, Nakuru Kiambu and Bungoma counties.
“We see that Raila Odinga has 18 counties that already have a voter preference above 55% for him and William Ruto has 17 counties where voter preference is 55% for him,” Muthoka said. “We think this could be clear win for the candidates. However, we have 11 counties which present as a battleground.”
At least 85% of more than 6,000 people sampled nationally said they were likely to vote in the August 9 election. Fifteen percent of voters said they are likely to stay away.
Employment and corruption prevention were highlighted as main issues among urban residents in the survey, while rural voters said they were most concerned about employment and education. The election will be Kenya’s third under a constitution established in 2010.