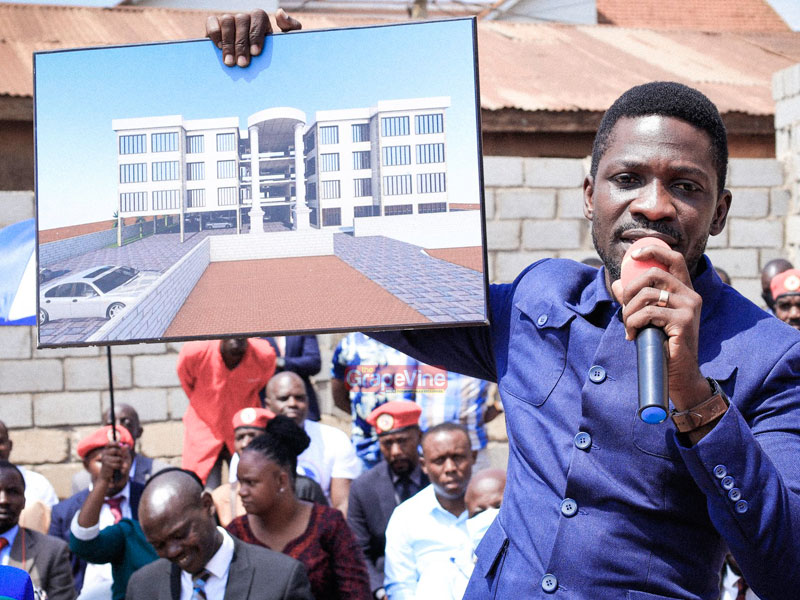 The leading opposition National Unity Platform has proved to Ugandans that they are a serious political party as they set to start construction of their new head offices in Kampala.
The National Unity Platform party is set to shift from its old Kamwokya based head offices after completing the procurement of prime land in Kawempe division.
Party President Robert Kyagulanyi while speaking at the groundbreaking event on Tuesday, said they decided to move away from their home in Kamwokya, which was too small for some party activities.
“We are doing this to show that even though this idea started with me, it is not mine alone. This is now your home. It is the headquarters of the incoming government,” he said.
Kyagulanyi also said the new office is intended to set them aside from the National Resistance Movement, which after 36 years in power has not been able to construct its own national office.
David Lewis Rubongoya speaking at the groundbreaking revealed that the old party offices in Kamwokya will be maintained and turned into a training facility for the youths.
On his part, NUP spokesperson Joel Senyonyi said the money to buy the three plots of land was mobilized from party leaders’ contributions as well as donations and funding from parliament.
Construction of the new offices he said will begin soon.
The party spokesperson Joel Ssenyonyi says the plan to acquire this site has been underway and only privy to the top party leaders.
“Of course given the nature of our country. You don’t have to spill whatever plans you have. We secured this piece of land in a robadob style,” he said. He however says shifting the head offices does not mean they will cut ties with the Kamwokya Secretariat.
“We are appreciative of the president H.E Kyagulanyi who has for the past four years offered us space rent free. We will continue to use that space for other purposes like retreats and maybe offering leadership training and tutorials to our youths,” he added.
The new site of the NUP is approximately half an acre of land in Bwaise Kawempe division.