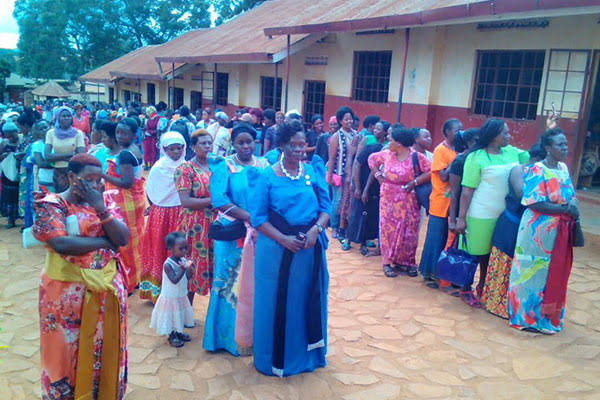 The National Resistance Movement (NRM) Central Executive Committee (CEC) which sat at State House, Entebbe, has recommended voting by lining up behind candidates, although this will be done during Party Primaries.

The Central Executive Committee (CEC) sitting in Entebbe on Thursday further discussed the proposed amendments to the NRM Constitution and adopted only  Lining up as a mode of voting during internal Party elections.

The meeting held in Entebbe on Thursday was chaired by the National Chairman H.E Gen. Yoweri Kaguta Museveni.

The Party Senior leaders widely discussed the advantages that come along with this proposed amendment some of which are listed here below:

1. Reduction in logistical and financial costs. There will be no procurement of ballot papers, buckets, indelible ink, pens and basins among other electoral materials.

2. It will provide for desirable Party cohesion because of being transparent.

3. It will uproot multiple voting.

4. It will reduce on temptations of election manipulation & commercialisation of politics.

5. Reduce on administrative costs the Party has been grappling with.

6. It will cure challenges of election postponement due to delays in production, packing,  and transportation of huge volumes of election materials.

7. Lining up will be in conformity with the National Laws of Uganda especially the Local Govt Act.

8. Will cure allegations of ballot stuffing.

9. It will eliminate and make extremely risky the phenomenon of election managers swapping results.

10. Allegations of ghost Polling Stations will be eliminated.

It is assumed that if approved by NEC today and the National Conference tomorrow, the NRM Secretariat will proceed and generate appropriate and enabling election materials that will include Voter Education Literature.