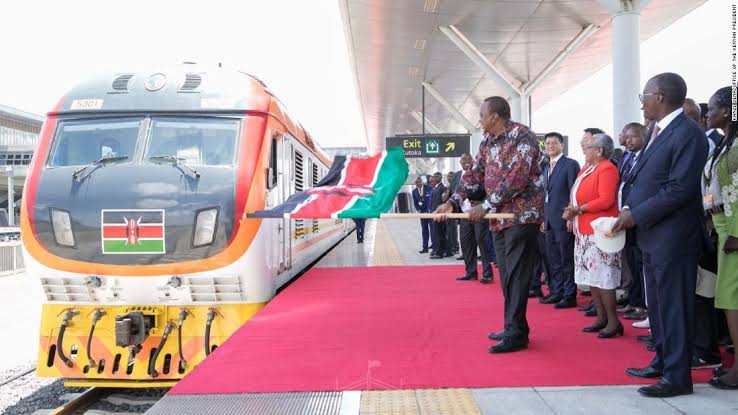 China has invested a lot in several African countries but has put keen interest in the Eastern African region by lending Uganda and Kenya colossal sums of money to construct the Standard Gauge Railway.

Although Uganda is yet to start construction of her railway, Kenya has already completed and launched theirs.

As such, Kenya on Tuesday launched the Nairobi-Naivasha Standard Gauge Railway (SGR) cargo service and an inland container depot (ICD) expected to revolutionize the transportation of bulk cargo through the country and across the East African region.

“Today, we mark the commencement of the freight train services to the Naivasha Inland Container Depot; thus making an unequivocal statement that we as a people are ready to ascend,” President Kenyatta said.

The commencement of freight services comes two months after the SGR passenger service between Nairobi and Naivasha was launched.

The railway is an extension of the Chinese-built SGR linking the port city of Mombasa to the capital.

“We equally remain hopeful that other economic and commercial ventures will be established along the line, which together will trigger the creation of productive employment, and in the process reduce poverty and inequality across the whole country,” said Kenyatta.

Wang said that the launch of the Nairobi-Naivasha SGR services marked another milestone in the history of railway construction in Kenya and Africa in general.

He also noted that the line is another major achievement of the China-Kenya and China-Africa cooperation on the Belt and Road Initiative (BRI).

“We will continue to promote Chino-Kenyan cooperation such as facility connectivity within the framework of BRI to build a closer China-Africa community of shared destiny,” Wang said.