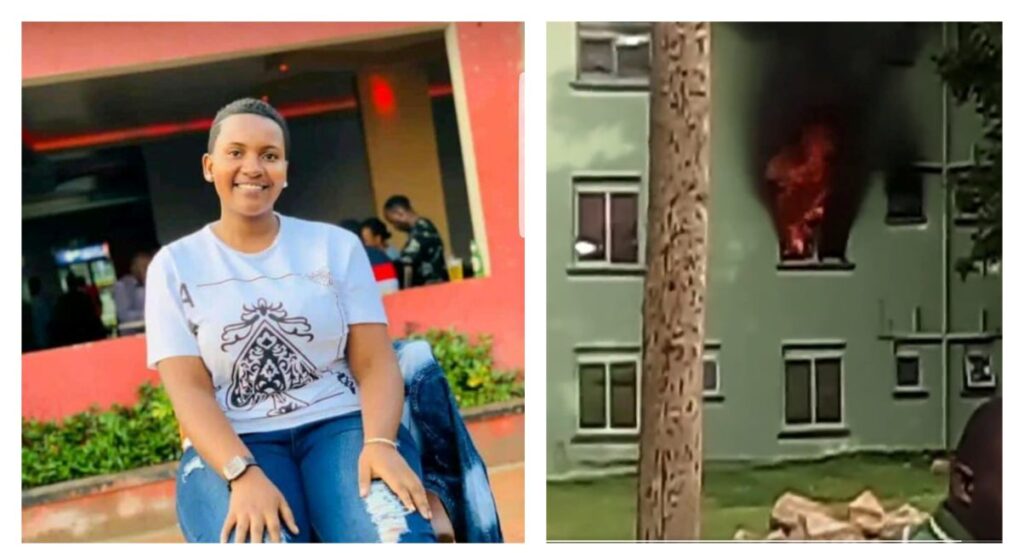 Following the circulation of images and a video alleging that a woman had locked up her boyfriend and her cousin sister in her apartment bedroom before setting it on fire, Ugandans on social media over the weekend were put into a depressing mood.
Arinda Patricia, 24, and a man only known as Kajumba, 27, were named as the two victims.
Arinda and Kajumba were allegedly invited to a ‘non-existent’ birthday party in Kawempe.
According to reports, Kaitesi reportedly sprinted out of the apartment and yelled out to his neighbors, saying the gas cooker had exploded.
The incident was confirmed by the deputy spokesperson for the Kampala Metropolitan Police, Luke Owoyesigire, who stated that it took place on Thursday night at Grace Sanyu’s home in Nabweru.
To determine the precise cause of the fire, Owoyesigyire said that representatives from the National Building Review Board, Umeme, and a police forensic team visited and documented the crime scene.
He added that their preliminary investigations indicate that the victims were locked inside the house before the fire started, and as a result, they are treating the incident as a murder.
The police fire brigade, which arrived on the scene quickly to put out the fire, discovered the gas can in the rental home intact, according to Owoyesigyire.
He claimed that after Kaitesi received treatment at Kawempe Hospital, she was arrested and taken into custody as the main suspect in the case.
The suspect (Kaitesi), according to a detective who spoke to the Daily Monitor under the condition of anonymity, left her cousin sister Patricia in the house while she went upcountry for Christmas.
The suspect allegedly began planning her retaliation when she learned from her neighbors that her cousin was having a secret relationship with her boyfriend.