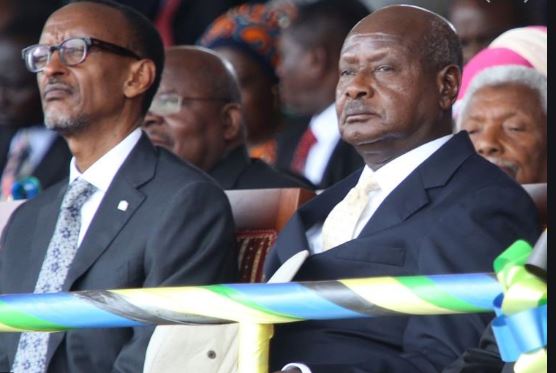 The bilateral meeting that was scheduled to take place between president  Yoweri Museveni and his counterpart Paul Kagame of Rwanda,  has been postponed reportedly due to the current Coronavirus (COVID-19) disease outbreak.

Cancellation of the meeting was communicated by the Ugandan ambassador and Permanent Representative to the United Nations Adonia Ayebare, who tweeted on Thursday evening thus; “Due to the Coronavirus pandemic and in consultation with the G77 member states, the Third South Summit that was to take place 16-19 April 2020 has been postponed to a later date this year. Pre-summit preparations will continue.”

During the 4th Quadripartite that was held at the no-man’s land in Katuna between Uganda and Rwanda on February 20th, 2020 both Kagame and Museveni agreed to meet again between 16 and q9 April to iron out their differences, with a view of opening Rwanda’s borders to Uganda, which Kagame closed in early 2019.

Aimed at stabilising the relations between Uganda and Rwanda, the summit being attended by President Yoweri Museveni and Paul Kagame, and was mediated by the President of Angola, João Lourenço and Democratic Republic of Congo’s President Felix Tshisekedi.

Trouble started in February 2019 when Rwanda government closed its border with Uganda and even issued a travel advisory barring Rwandans from travelling to Uganda.

In March last year, Rwanda publicly accused Uganda of abducting its citizens and supporting rebels bent on overthrowing the government.

The rebel groups Rwanda government accuses Uganda of supporting include the Rwanda National Congress and the Democratic Forces for the Liberation of Rwanda, although Uganda has since denied the allegations.

During their last meeting in Angola early this year, both Museveni and Kagame agreed to desist from supporting elements that want to destabilize the regimes in Kampala and Kigali respectively. They also agree to extradite prisoners of war that had been arrested on both sides.