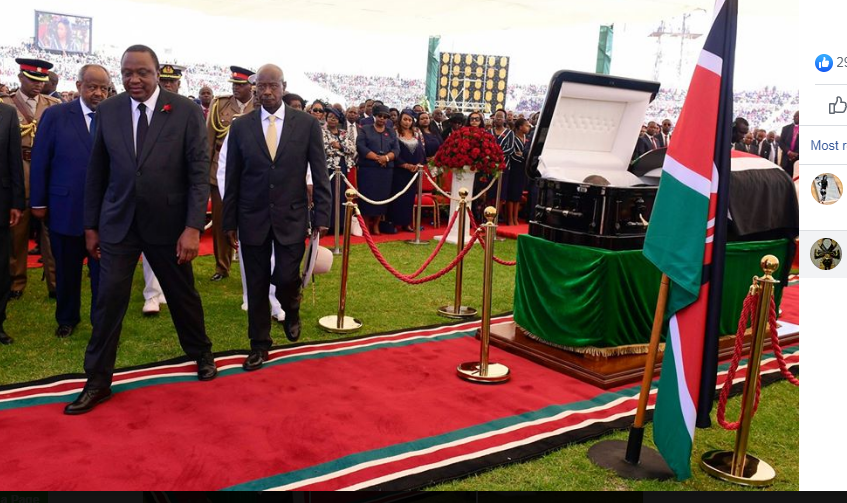 Museveni joined thousands of Kenyans and other mourners to celebrate the life of President Daniel Toroitich Arap Moi, at the Nyayo Stadium in Nairobi.

While eulogizing the fallen former head of state, Museveni tweeted thus; “Mzee Moi’s love for East African Unity was peerless, so was his forgiving and conciliatory nature. RIP Mzee Moi.”

He added that; “In Africa, leaders are like doctors. You must properly diagnose what ails your country lest it stays in perpetual trouble. Presidents Moi and Jomo Kenyatta did a good diagnostic job, explaining why Kenya has been stable.”

President Museveni, who was welcomed by Kenyan president Uhuru Kenyatta, eulogized the late Moi as a true East African, who did not only work for the political and economic integration of the region but had a real emotional attachment to it.

It should be noted that the late Moi on several occasions asked Museveni to let him visit places in Uganda that he felt attached to.

“I also remember him as a very conciliatory person. In 1987, when some troublemakers misled him to close the border with Uganda, he was open to talks. We met in Teso, Kenya, resolved the issues and worked closely,” Museveni revealed.

He concluded by saying that “On my own behalf and that of Ugandans, I, therefore, send my condolences to President Uhuru Kenyatta, the Moi family, Kenya and the region upon loss of this icon.

May his soul rest in peace. “