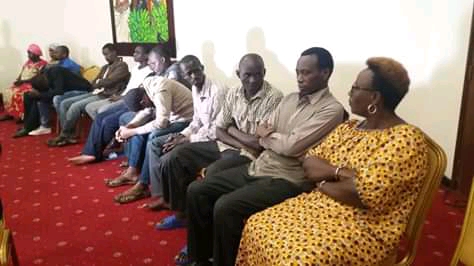 President Yoweri Museveni has Tuesday, February 2020 ordered the release of over 13 Rwandan nationals, who were handed over to the Rwandan Embassy in Uganda by Foreign Affairs minister Sam Kahamba Kutesa.

During the handover in Kampala, Minister Kutesa told journalists that the release of the Rwandans is aimed; “to clear the way to normalise relations” and that it doesn’t mean they did not commit the crimes for which they had been arrested.

Many of the released had been arrested over various charges that included espionage, illegal entry and stay into Uganda, among others.

He insisted however that the release does not mean that they did not commit the crimes but the move is for Uganda to follow the decisions made in previous meetings to normalize the relations between Rwanda and Uganda.

“We want to clear the way to normalize relations. We are not saying people are innocent,” he said.

He urged the Rwandan government to ensure the released Rwandans never return to Uganda to commit the crimes for which they had been arrested.

On what Uganda has lost, Kutesa said a lot has been lost; for instance, the closure of Gatuna/Katuna has affected trade and commerce.

“I think it is not good for integration,” he said. “Both sides have lost,” the Minister noted.