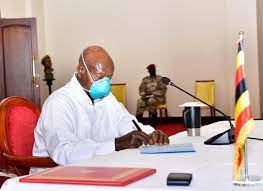 Museveni has exercised his constitutional powers by naming a new team to head the Public Service Commission.

In a letter to the Speaker of Parliament, Museveni has by virtue of powers given to him as president under Article 165(2) of the Constitution appointed a team of nine members to head the Public Service Commission.

“This is therefore to forward their names and curriculum vitae to you for parliamentary approval,” Museveni said in the letter to Speaker Among.

The same has also been copied to the Vice President, Prime Minister, and Minister for Public Service.