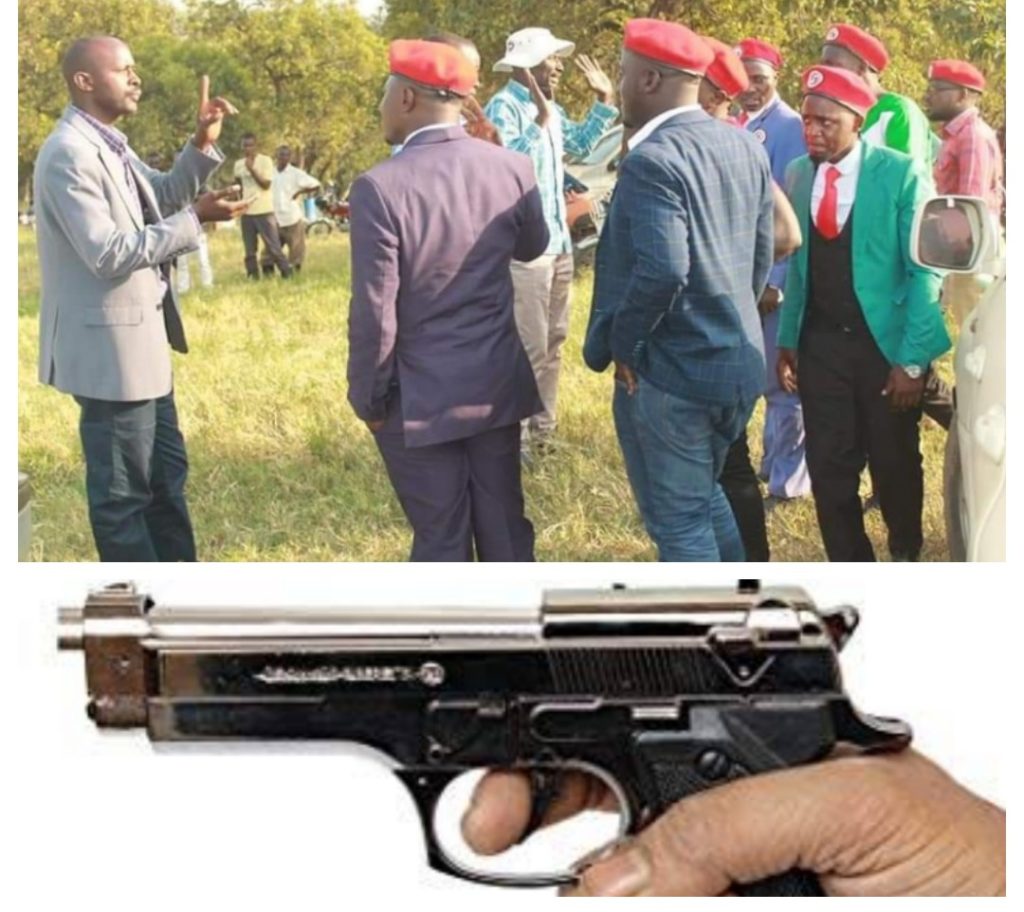 While  narrating the ordeal of the fracas MP Zaake narrated thus; “Yesterday, we spent the whole day in Mubende District mobilizing for People Power. The People of Mubende were so receptive to the idea of change, we wish to thank them for that.

However, there happened a scenario in one of the villages which I think the world should know.

Here is the story! On invitation by a colleague, Mr. Ainebyona Ronald, we drove swiftly through clouds of dust and entered Buwekula County to attend a wedding reception organized at their home which is strongly NRM leaning.

When we arrived at the venue some of the guests pulled out their pistols and threatened to shoot us dead if we entered the venue. Ainebyona, who hails from a staunch NRM family, is a law student and MP aspirant for Buwekula constituency in Mubende District, and had invited us earlier to attend the function.

Without any provocation, some guests became charged as soon as we approached. They confronted us and started forcefully shoving us away as they pointed pistols at us asserting that they did not want anything to do with People Power at ‘their’ function. It is at this point that Ainebyona sprung up from the groom’s seat and dashed towards the melee to save us. Although he informed them that he had invited us, the guests furiously insisted on pushing us away until he threatened to abandon the event and follow us.

The guests eventually gave up and let us in but with stern instructions that we should not give any speech. The function resumed but even then, speaker after speaker who took to the microphone threw insults at us and Ainebyona saying that they would disown him for associating with People Power.

Contrary to the usual norm, Ainebyona’s relatives withheld all cattle they had brought for him, and went ahead to threaten him with beatings if he dare stands for MP. Other speakers said they are ready to kill and shed blood if People Power wins the 2021 presidential elections. To show how serious they were, they said they would shoot me right at the function if anybody gave me a microphone to speak.

During his speech, the groom Ainebyona thanked his relatives for making the event possible, and reminded them that the law they sent him to study teaches him to tolerate others since we are all one people. But no sooner had he started formally introducing me to the guests, than one of them rushed and grabbed the microphone away from him. The function ended abruptly without the cake being cut.

I congratulate Ainebyona upon his marriage, and greatly appreciate him for showing extraordinary courage as he saved us from the irate guests. It is unfortunate that what was supposed to be a peaceful celebration turned out the way it did because of a few unprovoked guests who could not tolerate our political opinion.

Comrades, it is important to remember that our struggle is beyond tribe, religion, class or other social constructs. What unites us are the bad conditions in which we live, not the factors that distinguish us from each other. “