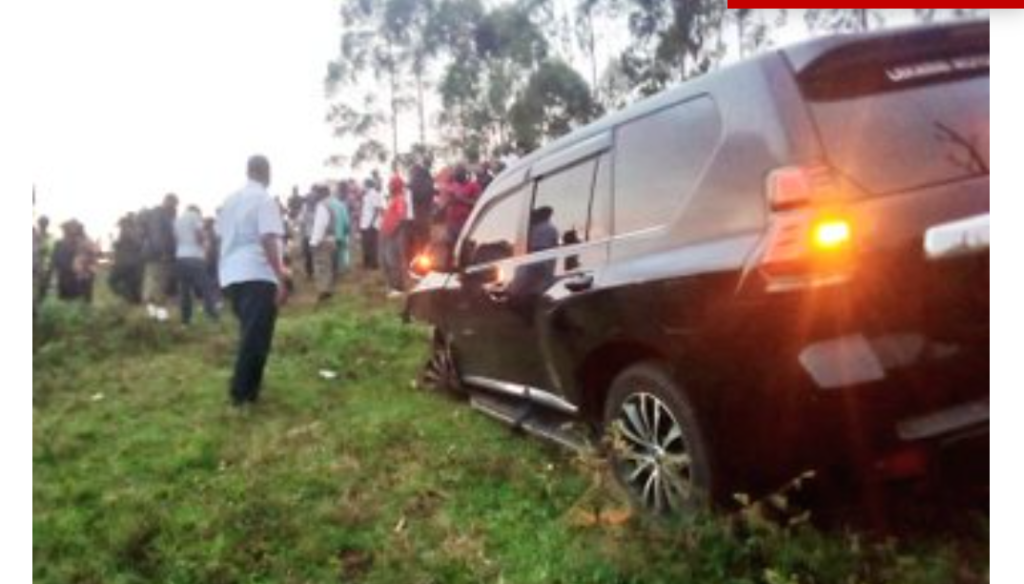 The Buhweju County Member of Parliament, Hon. Francis Mwijukye was, on Sunday, involved in a nasty accident along the Kampala – Masaka highway; claiming two children.

Reports reaching this site indicate that the Shadow Minister for Trade & Industries SUV Landcruiser Prado motor vehicle plunged into a nearby garden after hitting a motorcyclist that entered the road ‘unannounced’.
“FATAL Accident vide TAR 45/2021 of Buwama police station that occurred on the 22/8/2021 at about 1815/ at Buwama Town Council along Kampala-Masaka highway involving m/v reg no. MP WAITU Land cruiser Prado black belonging to one Mwijukye Francis MP Buhweju county” read a police report.
The reports also revealed that Hon. Mwijukye’s vehicle’s driver, a one, Barekye James, 47, a resident of Kasangati in Wakiso district lost control at the sight of the motorcycle reg no. UDX577E Suzuki red in colour ridden by an unidentified person.
The deceased who died on the spot include; Nabukenya Florence aged 13 years and one Lubyayi Tadeous aged 9 years who are all residents of Mbizinya village, Buwama Town council in Mpigi district.
“The victim was rushed to Gombe hospital for medication & the two bodies of the pedestrians were also taken to Gombe hospital mortuary for postmortem,” read a Police repor
Meanwhile, Opposition chief whip John Baptist Nambeshe survived an angry mob after knocking a person on Saturday
Nambeshe who was from Kampala heading to Mbale knocked an unidentified person at Namwezi, Kisoga zone in Mbiiko along the Kampala-Jinja highway in Njeru Municipality, Buikwe district
Residents said Nambeshe refused to stop and boda boda cyclists aggressively chased him, finally cutting him off in a traffic jam.
The mob hit Nambeshe’s vehicle and threatened to set it ablaze if he did not move out.
Nambeshe who was driving a government vehicle was only saved after he was positively identified by National Unity Platform (NUP) supporters as one of their own.
He was later driven to Njeru police station where he recorded a statement while the injured victim was rushed to Jinja hospital