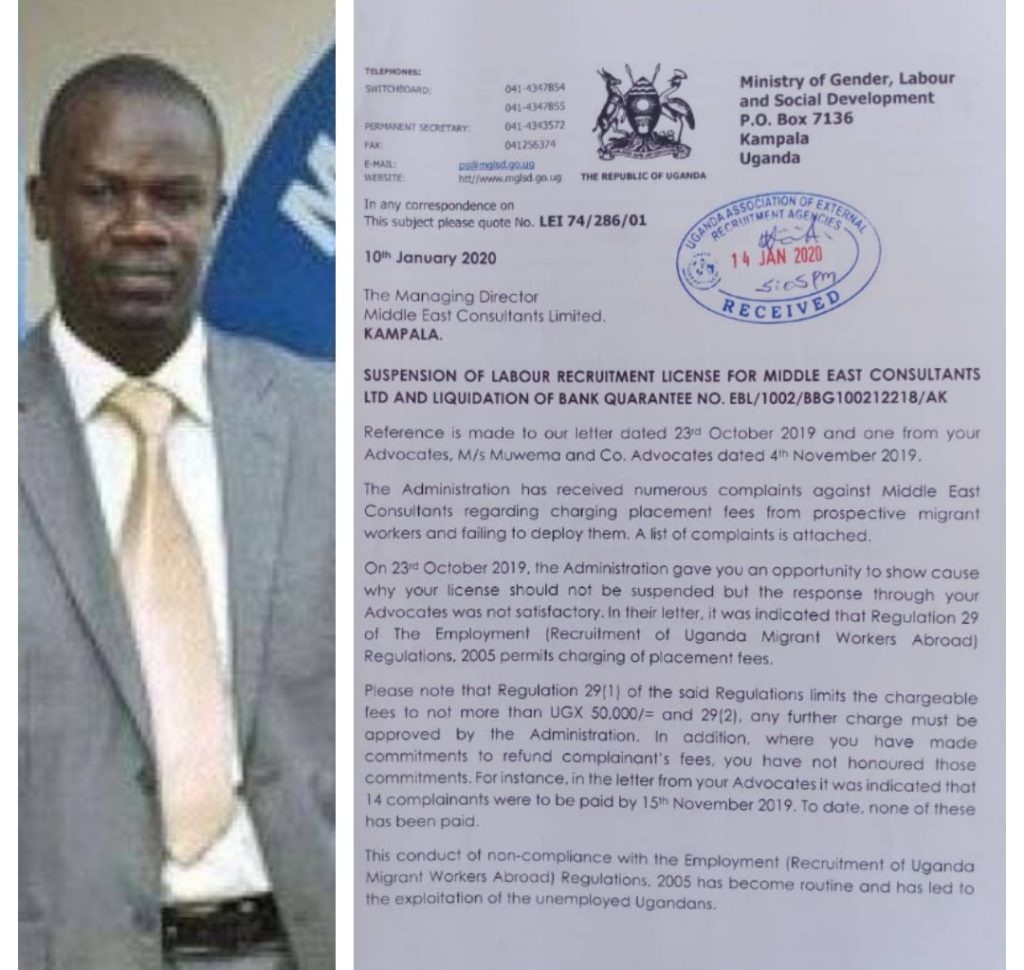 State House head of Anti-Corruption Unit  Lt. Col. Edith Nakalema and the Director for Labour at the Gender, Labour and Social Development Ministry Hon. Martin Wandera, announced the suspension on Wednesday after meeting some of the victims.

The suspension is enshrined in a letter dated January from the Ministry of labour, which was signed by James Ebiti on behalf of the Permanent Secretary.

Also as part to their directive, any media company that advertises Middle East Consultants will be liable for prosecution.

Middle East Consultants have been ordered to refund all the job seekers whose money they obtained by false pretence.

Middle East Consultants operations have since been suspended and they are no longer allowed to participate in or undertake any labour exportation services until further notice.

It should be recalled that last year, the management of Middle East Constants caused the arrest of the Drone Media Editor Pidson Kareire, whom they accused of   defamation after he exposed their illegal dealings, as confessed to him by some of the victims.

Kareire, who was later released from jail following the intervention of human rights lawyers and the media fraternity, exposed the very cases for which Middle East Consultants  has been suspended.

He prayed that court dismisses the case with costs since the evidence adduced  so far is overwhelming beyond reasonable doubt although his prayer was never granted.

In the recent past the sections of the media have been  investigating the numerous allegations against the Muyenga based company, with many of the company’s victims nursing broken hearts over unfulfilled promises and debts.

In many cases, the managers of the company have accepted their liability due to the evidence and pressure exerted on them by their victims and proceeded to refund the money or have made commitment to pay it back.

In other cases, some of the people conned either give up or settle for a percentage of their money after months of trying.

What is worrying, however, is that more desperate young people are flocking the company in the hope of securing a job abroad.

We have since established that some of the money collected from the fresh recruits is used to compensate the “stubborn ones” who demand a refund after the company failing to fulfill its promises.

Last year a group of about 20 people who had been promised jobs in Abu Dhabi, United Arab Emirates, and other cities protested at the company premises after they failed to get the jobs.

One of their leaders said that they were each refunded at least $1,200 (about Shs4.4m) in partial payments after months of false promises from the company.

A case in point is Adolf Kyaligonza, who on January 27, 2018, registered with  Middle East Consultants company for a job abroad.
He was consequently summoned for interviews for a job in Qatar, which the company said it had secured.

On the appointed date, he was among the more than 80 people who sat for an interview. They were warned beforehand that they needed to have money ready before doing the interviews. They had a window of only 24h hours.

Middle East Consultants officials reportedly told him his visa would be ready in five days.
On the same day, On September 4, 2018, the company asked Kyaligonza to pay more money through one of its workers, a one Sarah Ninsiima, to process his travel.

He paid to Ninsiima Shs500,000 for verification of his Advanced Certificate of Education, Shs300,000 for Interpol (Certificate of Good Conduct), Shs100,000 for the “Yellow Book” [Yellow Fever card].

Between October and December, 2018,  Kyalionza regularly travelled from Fort Portal in Kabarole District to Muyenga in Kampala to check on the progress of his travel.

Each time, he was promised, including undertaking fresh interviews for other jobs in Abu Dhabi but he never got any job.
By December 15, Kyaligonza gotten fed up of the unfulfilled promises and started demanding a refund of his money.

The general manager, Benon Kunywana, sent Kyaligonza to the company’s accounts office where he was given refund forms. He was informed that he could only get a refund after 35 to 45 days.

Meanwhile, Kyaligonza  had to go into hiding because the bank where he had borrowed money was after him.
His care was later presented to Middle East Consultants managing director Gordon Mugyenyi on January 25, 2019.

He said he was out of the country, but referred it to Kunywana to deal with the issue.
When we contacted Kunywana about the case, he asked to meet Kyaligonza, saying his money would be refunded.

After pressure being mounted on the Company,  Kyaligonza was eventually refunded his $1500 and the Shs900,000 that he had paid to the company.

However, all the money he spent in pursuing his refund was not refunded and he is currently toiling to pay the  interest accrued on the loan.

Suffice it to say that apart from Kyaligonza, there are several other victims of this fraud that was being perpetrated by Middle East Consultants until government decided to suspend their license.

Meanwhile, it should be noted that last year, two managers of Middle East Consultants,  who were arrested and charged with human trafficking, were in November last year committed to the High Court.

They allegedly forged documents of the Ministry of Gender, Labour and Social Development to facilitate their illegal operations.

Each of them was asked to commit a cash bail of Shs2m before securing temporal freedom, while their sureties were committed to a non-cash bail of Shs5m.

The sureties included Gordon Mugyenyi, the Managing Director Middle East Consultants and Richard Ssembuusi, an employee of the same company