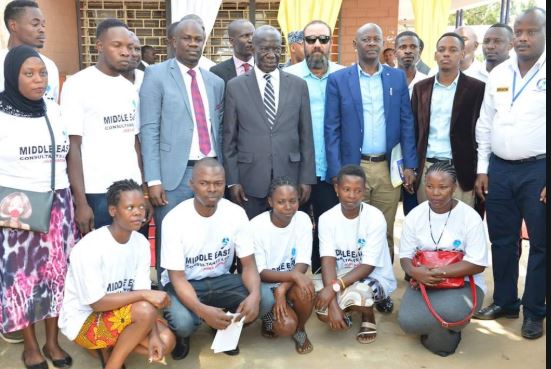 Middle East Consultants and five other companies have been suspended by the Ministry of Gender, Labour and Social Development from engaging in labour exportation services over allegations that they extort money from innocent Ugandans under the pretext that it is for registrations and placement fees.

The affected companies are faulted by the Ministry for forcing job seekers to pay exorbitant amounts of money claiming it is for registration and placement, which is against the law.

The suspension of these companies from engaging in any labour exportation activities was communicated in a letter by the Gender ministry’s Permanent Secretary James Ebitu, which reads in part that;

“Members of the Press,

Colleagues from the Ministry of Gender, Labour and Social Development

You will recall that I addressed you on 4th February 2020, as a response to a number of complaints we receive, and also read in the press and son social media, regarding the unscrupulous action of charging of illegal registration and placement fees by licensed recruitment agencies.

I informed you that Regulation 29 of the Employment ( Recruitment of Ugandan migrant workers abroad) Regulations, 2005,  limits the chargeable administrative fees to Fifty thousand shillings (50,000).

Regulation 29(2) provides that any further placement fees must be approved by the Administration, which is our Ministry.

In addition, Regulation 29(3) provides that Placement Fees shall be collected from a Ugandan Migrant Worker after he or she has signed the employment contract.

I also informed you that we had written to all recruitment agencies giving them two weeks to refund the said fees by 17th February, 2020. We also warned that failure to do so would lead to immediate suspension of a  company’s license.

Unfortunately, a number of companies have not complied with the directive and have failed to pay back these monies.

The Permanent Secretary Ebitu continues that “Consequent to the above, these companies have been suspended, and have been directed to desist from any acts of labour externalisation, as from 18th February, 2020. Anyone dealing with them does so at his/her own risk.”

However, by press time neither Middle East Consultants nor any of the suspended companies had come out to issue a statement about the development or appeal the suspension.