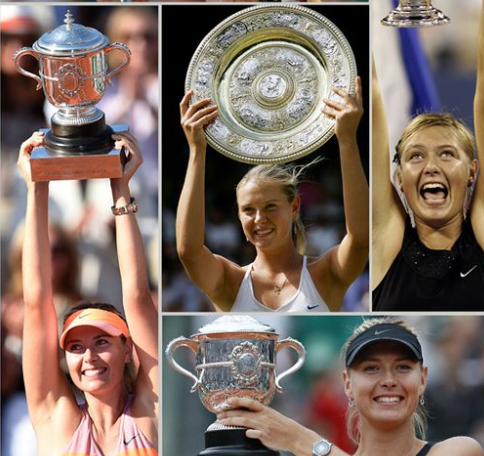 Maria Sharapova, a celebrated lawn tennis player, has thrown in the towel after she decided to retire from the game.

Sharapova, who retired Wednesday, February 26, 2020, at age 32, was a star on and off the tennis court, reaching No. 1 in the rankings, winning five Grand Slam titles and making millions of dollars in endorsement deals.

Here is a look at her Grand Slam singles Titles:

Upset two-time defending champion Serena Williams 6-1, 6-4 in the Wimbledon final to win her first Grand Slam title at 17. Sharapova became the third-youngest winner at a tournament that began in the 1870s.

Won the U.S. Open for her second major title, beating Justine Henin 6-4, 6-4 in the final.

Won the Australian Open for the third Grand Slam trophy of her career, defeating Ana Ivanovic 7–5, 6–3 in the final. Missed that year’s U.S. Open because she needed surgery on her right shoulder, a recurring problem for the rest of her playing days.

Won the French Open to complete a career Grand Slam, overwhelming Sara Errani 6-3, 6-2 in the final. Sharapova became the 10th woman in the sport’s history with at least one title at each of the four most prestigious tournaments in tennis; she is one of six women to do it in the professional era. Later that season, won a silver medal at the London Olympics, losing to Williams in the final.

Won the French Open again, edging Simona Halep 6-4, 6-7 (5), 6-4 in the final; it would be Sharapova’s last Grand Slam title. She also became the first tennis player to pass 15 million followers on Facebook. She currently has more than 8 million followers on Twitter and nearly 4 million on Instagram.