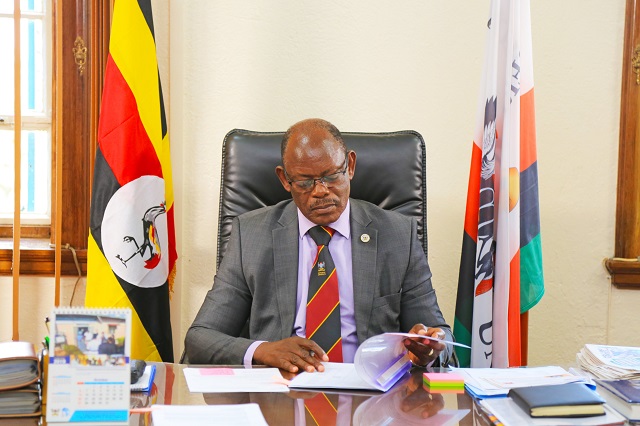 Makerere University Vice Chancellor Prof. Barnabas Nawangwe, has suspended Sulaiman Namwoza, a third-year student pursuing Bachelors of Medicine over alleged indiscipline.
In a letter dated 1st August 2022, addressed to Namwoza, Prof Nawangwe alleged that the said student convened an online meeting which was attended by former 88th Guild aspirants, intended to push the reinstatement of the Guild leadership.
“In the said meeting it is alleged that you made resolutions tantamounting to misinforming fellow students as well as directing the chairperson of the University council to reinstate the student Guild leadership well knowing that council had suspended the students Guild, senior common room, and all student’s leadership structures and had appointed a select committee to review the students Guild operations,” part of the letter reads.
“Because of your alleged involvement in the above offensive acts, I hereby suspend you from Makerere University with immediate effect until further notice. You will be invited to appear before the students’ Disciplinary committee for interaction regarding this matter on a date to be communicated to you in due course.”
Speaking to URN, Namwoza who is the speaker of Lumumba hall, said the role of the meeting was to help in laying strategies on how students can engage the University council to help in reinstating the student Guild leadership that was suspended last month after chaos during the campaigns that resulted into the death of a UCU student.
“We spent two weeks without receiving any information, we were worried because we were approaching exams and we were not having Guild Leadership, so as students, we wanted to hold a meeting and discuss different issues intellectually and not be violent.”
Part of the resolutions from the meeting which was attended by all the 88th Guild aspirants was to elect a committee of 5 students who were supposed to engage the interim committee appointed by the University Council on issues concerning the Guild leadership.
The committee led by Namwoza had Sonia Anita as the Vice Chairperson, Luyombya Joshua, as the General Secretary, Lawel Muhwezi, the spokesperson, and Bijirwa Maxwell who was the mobilizer supposed to engage the Univerity Council on behalf of other students.
But a few hours before the meeting was held on 29th July, he received a call from the Vice Chancellor’s personal assistant, Gordon Mulangira informing him to call off the meeting because he was going to be suspended, but he continued with it because he believed it was not violating any laws.
He however says he was shocked when he was called to pick up his suspension letter which is made up of only allegations. “It broke me down honestly because we are heading to exams and am not sure when I will be called to the disciplinary committee to have a fair trial, am trying to engage different offices but still am not helped. I have a feeling that the suspension was uncalled for because I was trying to engage the management and the council intellectually and trying to express my freedom of expression.”