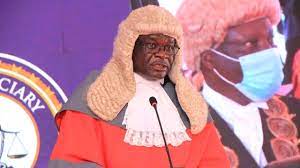 The Chief Justice Alfonse Owinyi Dollo sounded a warning while swearing in 85 acting grade one and chief Magistrates who he implored to guard the independence of the Judiciary and serve equitable justice to Uganda, at the ceremony held at the High Court Headquarters in Kampala.

Chief Justice cautioned the Magistrates against taking bribes in the course of their work and favouring some cases against others.

He further warned the Magistrates against laziness stating that there will be routine monitoring in which the principal Judge will be tasked to explain why a case stays without being disposed off for a period of two years and it will soon move to six months.

The Chief Justice also called upon the new sworn in Judicial Officers to accept whatever station they will be posted at emphasising that not everyone will have to work in Kampala and the neighboring districts.

The Judicial Officers were urged to respect the Judicial oaths they took today, manage time, build confidence in the people they serve and not choose cases to handle.

Chief Registrar Sarah Langa Siu warned them against acting unprofessionally, and further advised them to guard their jobs since they have joined a Judiciary that is transformed with its own Judicial Administration Act.

She however warned them that this will only happen if they give the Judiciary and the people they serve all their best.

She also warned them against absenteeism stating that those found culpable will be given half pay, to respect Authority and be an enemy to all vices affecting the Judiciary.

She revealed that currently, the number of casebacklog stands at 5908 cases with those at the chief Magistrate Courts standing at 1299 cases (22%) while at grade one, stands at 295 cases(5%).

This Financial Year, they are also going to open new High Court Circuits in the district s of Nebbi, Kitgum, Apac, Kamuli, Lyantonde, Bushenyi and Kasese