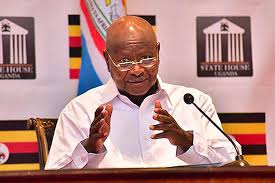 President Yoweri Museveni has responded to public complaints about the lengthy road closures whenever he travels by saying that it is a precautionary measure by his elite force, the Special Forces Command.

Museveni claimed in a speech to the nation on Friday that the rebels of the Allied Democratic Forces (ADF) are the reason roads are closed to allow his convoy to pass.

“When I’m moving around, they stop vehicles, which is something I wouldn’t like, but because we still have these types of elements; that’s why the security takes precautions, which sometimes inconvenience the public, but we are really weeding out ADF in Congo, and we shall get rid of those inconveniences after we have thoroughly uprooted ADF,” said Museveni.

Museveni reassured the nation that the recent wave of attacks on security personnel are simply the criminal behavior of a small number of people, some of whom are connected to the ADF.

“When you attack armed people, you may succeed once but once the armed people know the group attacking them, they are alert.

This time you come, they will be ready for them, and that’s what is happening. I want to reassure the public that these are shallow types of actions that should not concern you because those linked to ADF will be dealt with,” he said.