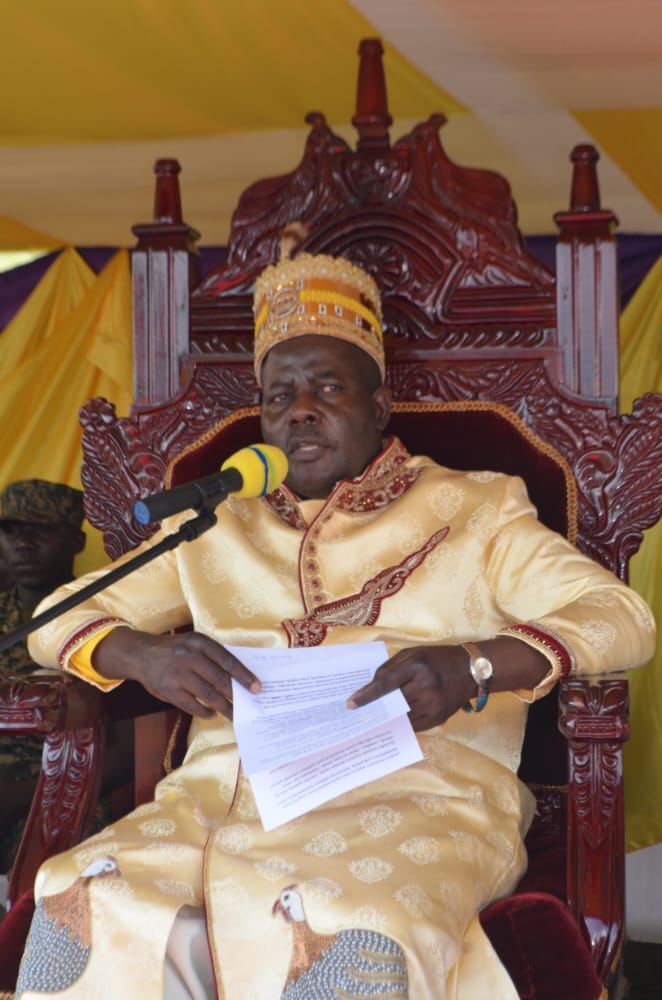 As he celebrates 14 years on the throne, His Highness the Sabanyala Baker Kimeze urged the people of Kayunga to be united in preserving their norms as this will take them forward.
The event was held at Kitatya primary school playground in Kitimbwa sub county in Kayunga District with a handful of people.
Sabanyala condemned the ethnic and religious divisions that are taking the people of Bugerere nowhere and pledged cordial relationship between the chiefdom and the Kayunga district administration to fight the vice.
Kimeze expressed concern over the 100 youth who were arrested during the general election period in Kayunga and are still behind the bars, he urged his prime minister to collect the names so that he could follow up the matter.
” It’s really very unfortunate that my servants are rotting in prison cells without being tried, I want those 100 names so that I can follow up the matter,” Kimeze said.
However, he spoke about the challenges faced by the Banayala community in Bugerere, especially marginalisation, poverty and illiteracy. He said to overcome these problems people have to work together, by educating children, farming and building granaries which will save them from hunger.
Amidst the ceremony, Lunyala and Luruuri dictionary was launched in order to promote both languages in schools.
Bunyala Chiefdom prime minister, Martin Luther Senkatuuka urged people not to be discouraged in their love for their culture especially the Lunyala language as many are ashamed to speak it in other parts of the country.
“Feel free to speak your language as a way of promoting it in the young generations across the chiefdom,” Senkatuuka said.
Senkatuuka also urged the ministry of education and sports to include the Lunyala and Luruuli dialects in primary school so as not to be erased by other languages.
The Banayala community thanked the government for its efforts to fight poverty by extending government programs to them and protecting the environment in Kayunga, especially fighting for Bajjo central reserve forest.
Kayunga District Chairperson Andrew Muwonge complained about the challenges faced in Bugerere including political divisions which have left the people of Kayunga behind in terms of service delivery, and appealed to the chiefdom to step in to unite the people of Kayunga, a move that will fast track development in Bugerere.
Amongst the notables on the event were the Isabaruuli of Buruli Mwogezi Butamanya, Ikumbania of Bugwere Chiefdom Geoffrey Wayabire and the Deputy Residents commissioner for Kayunga district.