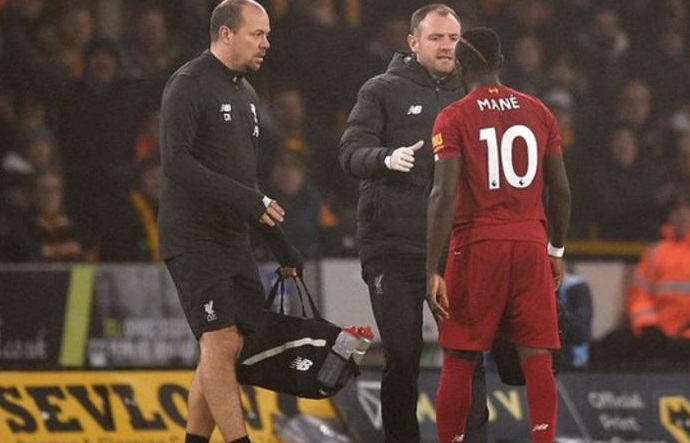 Liverpool will assess Sadio Mane after the forward suffered a hamstring injury in their 2-1 win over Wolves.

The Senegal forward limped off in the first half and was replaced by Premier League debutant Takumi Minamino.

Roberto Firmino scored a late winner to take the Reds 16 points clear of Manchester City at the top with a game in hand.

“Sadio felt something in his hamstring. We don’t know yet. We have to wait,” said Liverpool boss Jurgen Klopp.

The Reds face three games in the next nine days – with an FA Cup trip to Shrewsbury on Sunday followed by league games against West Ham on Wednesday and Southampton next Saturday.

“That is tough and it’s probably without Sadio,” said Klopp.

Klopp ‘forgot’ how many points Liverpool are ahead

Liverpool were given one of their toughest tests of the season before eventually extending their unbeaten run in the Premier League to 40 games.

Jordan Henderson headed them into an early lead before Raul Jimenez’s deserved equaliser for Wolves – with Firmino scoring an 84th-minute winner.

Klopp says he is not feeling any pressure about being so far clear at the top,

“I don’t think about it, I had to ask about exactly the amount of points, that’s the truth, I really forgot in the week,” he said.

“That’s three games in seven days which is a lot. We lost Sadio Mane and that’s the pressure I think about. All the rest is no pressure.

“We said it before it would be a really tough game, Wolves are doing so unbelievably well, they are so different to everything else you face.”

Klopp praised his captain Henderson, who scored the opener and set up the winner.

“I am not sure when Hendo became involved in offensive set-pieces. He is normally the protection. It showed another side and he is in outstanding shape at the moment,” he said.

“He played an unbelievable game in a difficult game. He was helping people, shouting at people – but it is not about shouting, it is about what you say.

“He only asks of others what he expects of himself. We couldn’t be in this situation without him.”