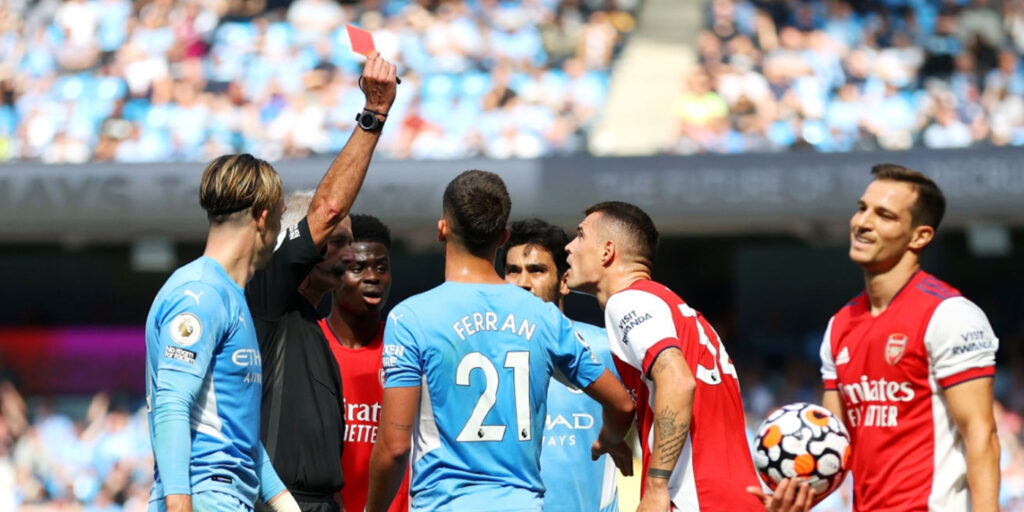 Ten-man Chelsea held on for a 1-1 draw at Liverpool after Reece James’ controversial dismissal, while Mikel Arteta urged his Arsenal flops to “look in the mirror” after a dismal 5-0 thrashing at Manchester City on Saturday.
European champions Chelsea took the lead through Kai Havertz’s looping header from James’s corner in the 22nd minute.
But a hard-fought clash of title contenders turned when James was sent off in first half stoppage-time.
The Chelsea defender, stationed on the goal-line, blocked Sadio Mane’s effort with his thigh and then his arm after Joel Matip’s header had hit the bar.
Referee Anthony Taylor was advised to check with the pitchside monitor and he awarded a penalty before sending off James for denying a goalscoring opportunity.
Chelsea complained furiously but Mohamed Salah stepped up to convert the spot-kick before another angry protest from Blues defender Antonio Rudiger and goalkeeper Edouard Mendy sparked a penalty area melee.
Liverpool dominated the second half but Chelsea defended superbly, with Mendy making several fine saves.
Both sides remain unbeaten after seeing their 100 per cent records come to an end in what was the first chapter of what should be a gripping title race.
Arsenal have lost their first three league games and are yet to score a goal this term.
Arteta’s side sit bottom of the league after their worst start to a season since 1954 as pressure mounts on their under-fire boss.
Arteta’s switch to a back three failed to halt a slick City attack that suggested they are more than capable of defending their Premier League title this season despite missing out on Harry Kane and Cristiano Ronaldo.
Arsenal’s task was made even harder when Granit Xhaka needlessly lunged at Joao Cancelo and was shown a straight red card.
Gabriel Jesus made it 3-0 before halftime before Rodrigo and Torres, with his second of the afternoon, rounded off the scoring
“I’m really disappointed with the things that happened on the pitch and the summary after three games, losing all of them, doesn’t make it any easier,” Arteta said.
“It is time to reflect and look in the mirror, each of us, and try to change the dynamic straight away because we need to pick up results.
Despite Arteta’s woes, Manchester City boss Pep Guardiola insisted Arsenal should keep faith with his former assistant
“I love him, we love him,” Guardiola said. “The period we worked together, these two or three seasons was a key point to build what we now have.
“I know, completely, his talent. I am pretty sure the moment will come when everything will be back and he will do a job