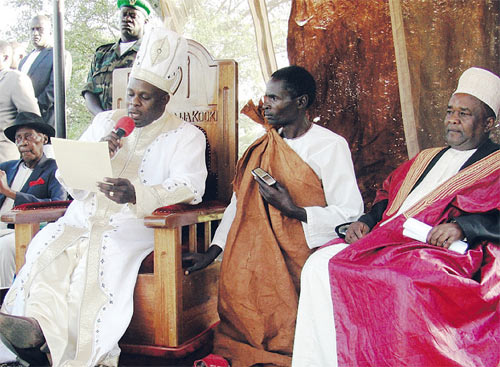 A group of Kooki Chiefdom loyalists went to Lwamaggwa Sub County and protested against a football match organised by Buganda Kingdom officials on May 20, 2022.
The demonstration prompted police to suspend the football tournament on orders of Rakai Resident District commissioner Ms Sarah Kiyimba, suspecting that the games will breed conflict between loyalists from Buganda Kingdom and Kooki chiefdom.
Police dispersed football fans who had gathered to watch two games at different playgrounds in the sub counties of Lwamaggwa and Kifamba over the weekend.

Ms. Kiyimba said they had received information that youth from Kooki chiefdom were planning to disrupt the matches by pelting stones at the spectators.

“As security, we get information from different sources. We were therefore told that there could be chaos and thus we had to intervene to prevent bloodshed” she said
Ms Gertrude Nakalanzi Ssebugwawo , the coordinator of Buganda Kingdom programmes in Kooki Chiefdom, said the matches had been organised in different sub counties to select a suitable team which would represent Kooki in this year’s Buganda Kingdom Masaza Cup.

“We have all along been struggling to get a good team to represent us in the Masaza Cup tournament and we came up with this idea of screening the players after they have played in their respective sub counties,” she said.
Despite the interruption, Ms Ssebugwawo said the football matches would be rescheduled as planned and cried out to police to bring those stage managed goons to book.

Mr Godfrey Kimbugwe, the deputy Katikkiro ( Premier) of the Kooki cultural institution accused Ms Ssebugwawo and her team of undermining their chiefdom and its hereditary cultural leader, the Kamuswaga Apollo Sansa Kabumbuli II, by organising cultural activities without informing them.

“Unless we are informed about such activities before they are organized, we shall use all possible ways to disrupt them because they are intended to create divisions among our people,” he said.

The Kooki Kingdom was established sometime between the years 1696 to 1740 by the Mubito prince of Bwohe. Bwohe was a part of the Bunyoro-Kitara dynasty who with his followers broke away from the larger Bunyoro-Kitara Kingdom and created his own.

In 1896, the embattled Kooki was seeking protection against external invasion and signed an allegiance agreement at Mengo with the Kingdom of Buganda.

Under this agreement the Kamuswaga was given a special seat in Buganda’s parliament, cultural privileges, and a right to preserve cultural autonomy. The Kooki would also be made into a first class county (Saza) with a special status. The Kooki remained semi-independent until 1966 when Uganda’s first Prime Minister Milton Obote abolished the Kingdoms in Uganda.

From the above history Kooki is constitutionally part of Buganda and one of the 18 counties of Buganda Kingdom, but leaders in Kooki insist it is an independent cultural institution.