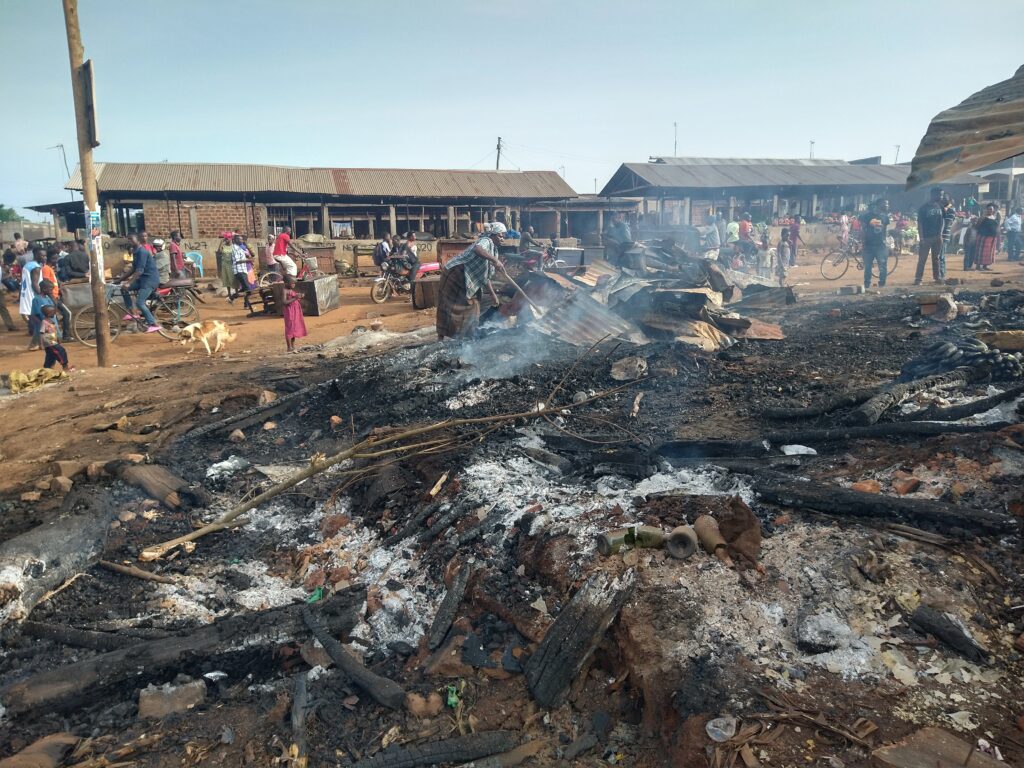 Tears, Anger and desperation engulfed vendors at the Basooka Kwavula Market in Kisoga town council, as their merchandise worth of millions of shillings razed in a mysterious fire.
The Market hosts over 300 traders and most them are single mothers and widows, selling dried fish, charcoal, gonja and merchandise.

The inferno that broke out at about 9am left property worth millions of shillings burnt. That includes pork butchers, plastic shops, restaurants and bars fish and tomatoes stall.

The traders who lost their property pins the landlord for being behind the inferno citing that he has always been sending notifications documents chasing them away.

“The land lord is behind it because he wants to use his land, but we don’t have somewhere to go”

Traders with tears rolling, they blamed the landlord for burning their merchandise at least he would have used another alternative because now we are counting losses.

Kawalya Isaiah a vendor in this market shifts the blame to the leadership of Kisoga led by Hudson Kiyaga for not providing traders a lawful market, because traders pay taxes to the town clerk.
The Mukono South member of Parliament Fred Kayondo who shiftly visited the scene appealed to local government ministry to always to have proper planning to the new town councils it put in place.

Kayondo gave out two million shillings to the management of the market, so that they could reconstruct themselves. However, the money sparked chaos and division amongst the vendors.

Kisoga was merged with Ntenjeru to form the current Kisoga – Ntenjeru town council in 2017, but since then they have not fully attained the budget for good service delivery to the people.