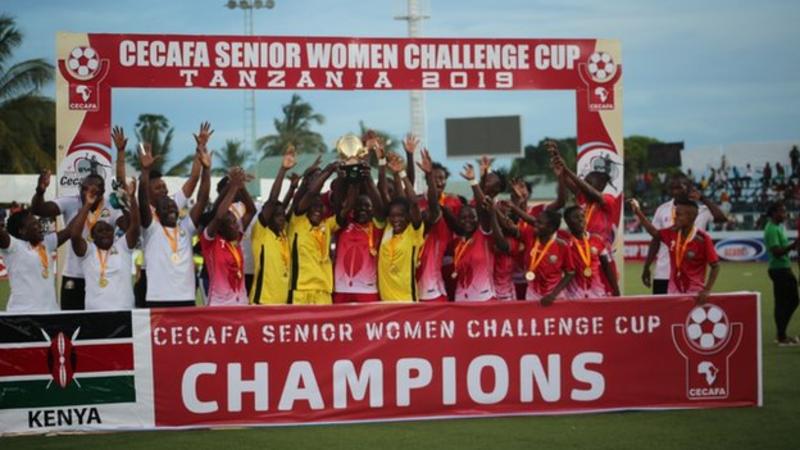 Striker Jentrix Shikangwa came off the bench in the second half to score a brace to guide Kenya to victory.

Both teams had gone into the final unbeaten without conceding a goal.

“This is a sweet win after we were disappointed failing to beat Zambia a few days ago in the 2020 Tokyo Olympics qualifier,” said Shikangwa.

The defeat left Tanzanian fans disappointed after their side had won the previous two CECAFA Women’s titles in 2016 and 2018.

“This is a sweet win for us because we lost to Tanzania in the final in 2016,” said Kenya’s captain Dorcus Nixon.

David Ouma, the Kenya coach praised his team for the discipline: “The team played as a unit and won the trophy without conceding a goal.”

The Tanzanian coach Shime Bakari admitted they had lost to a solid Kenyan team.

“A final is a final and Kenya took their chances. This is a new team and the exposure is also good for them,” Bakari said.

Kenya’s Shikangwa won the top scorers’ award with 10 goals, while the Golden Glove Award went to Kenya’s goalkeeper Annedy Kundu who did not concede a single goal in the whole tournament.

Nicholas Musonye, the CECAFA Secretary General, said he was impressed with the level of competition.

“We are happy women football in the region is growing and this was exhibited by the high levels of competition,” he said.

“We are also glad South Sudan and Djibouti sent teams for the first time,” he added.