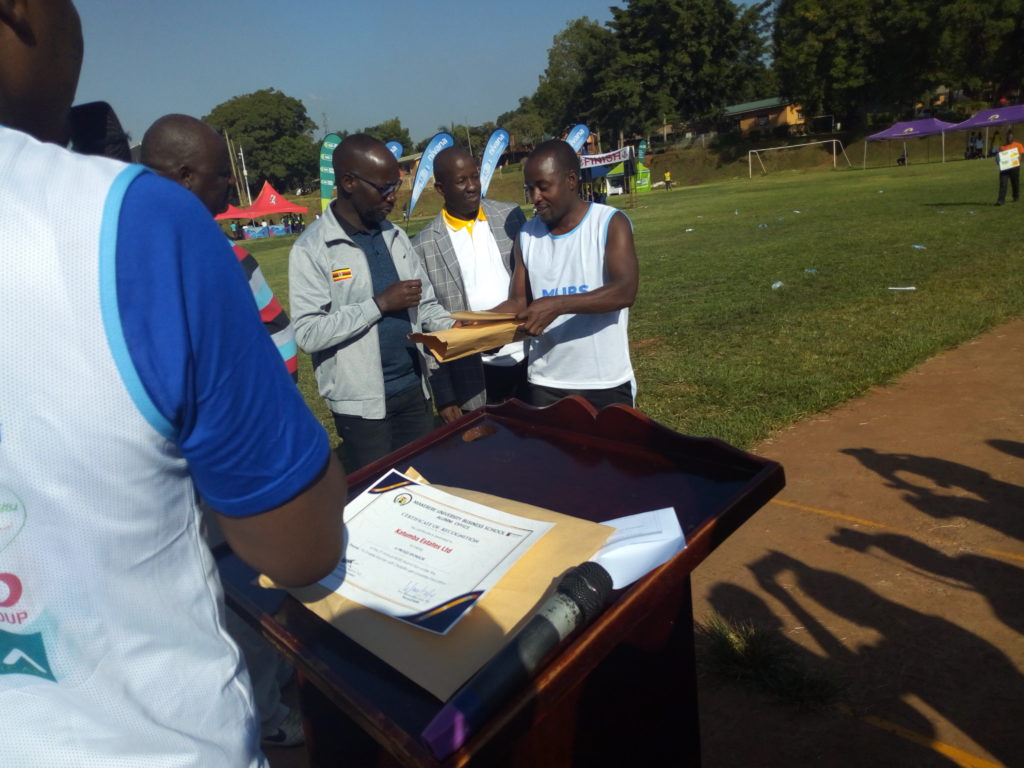 The MUBS Alumni Run is an annual marathon that spurns 5Km and 10Km respectively and this year’s Run was based on the theme ‘raising tuition for the disabled girl child’.

The marathon, in which people with disabilities and children also participated, kicked off at the MUBS main Campus in Nakawa at exactly 7:00 Am and by 8:00 AM, the runners had started returning to the finishing line.

The State Minister for Sports Dennis Hamson Obua was the Chief Guest, after standing in for Deputy Speaker Jacob Oulanyah, who was away on state duties.

The minister thanked the gathering for contributing to the education of girls with disabilities by participating in the run.

He said that “The ‘W’ in PWD (People With Disabilities) can either mean ‘With’ or ‘Without’ disability. There are many people with disabilities who actually have a lot of abilities. So giving them an opportunity to acquire education is the best gift you can ever give them.”

He added that “ I thank you very much for running for such a noble cause and contributing the little you had such that you can give  girls with disabilities tuition fees such that they can attend university.”  The minister thereafter announced that he had bought kits worth Shs500,000 as his humble contribution towards the cause.

In his speech, Prof. Moses Muhwezi, the Deputy Principal, who was the Chief Host, revealed that MUBS  is set to start a Bachelor’s degree of science in sports management. He said the degree is good for people who want to combine their passion for sports with business skills.

On his part, Katumwa, who is contesting for the Nansana Municipality Member of Parliament seat come 2021,  said that  “Many girls with disabilities are always victims of abuse. They are segregated in most cases and many parents don’t even want to pay school fees for them. However, these girls  have the ability to do a lot of things  for the country if  given the right educations and skill.”

He added that “The can read and write but need special books, they can use computers but they need a special keyboard, among other things. It is through activities like the MUBS Alumni that we raise funds to help them.

Some of the winners for the day include;

The winners went away with trophies and medals Katumwa Sports Center, certificates from MUBS, plus lots of goodies from Teso Juice factory (TeJu), Pepsi-Cola and other sponsors of the event.

Mandela Group of Companies, Katumwa Sports Center, Pepsi, Daxtine Publication, YPMA, Shaka Zulu Foods and the National Union of Women with Disabilities of Uganda (NUWODU) are some of the supporting crew.