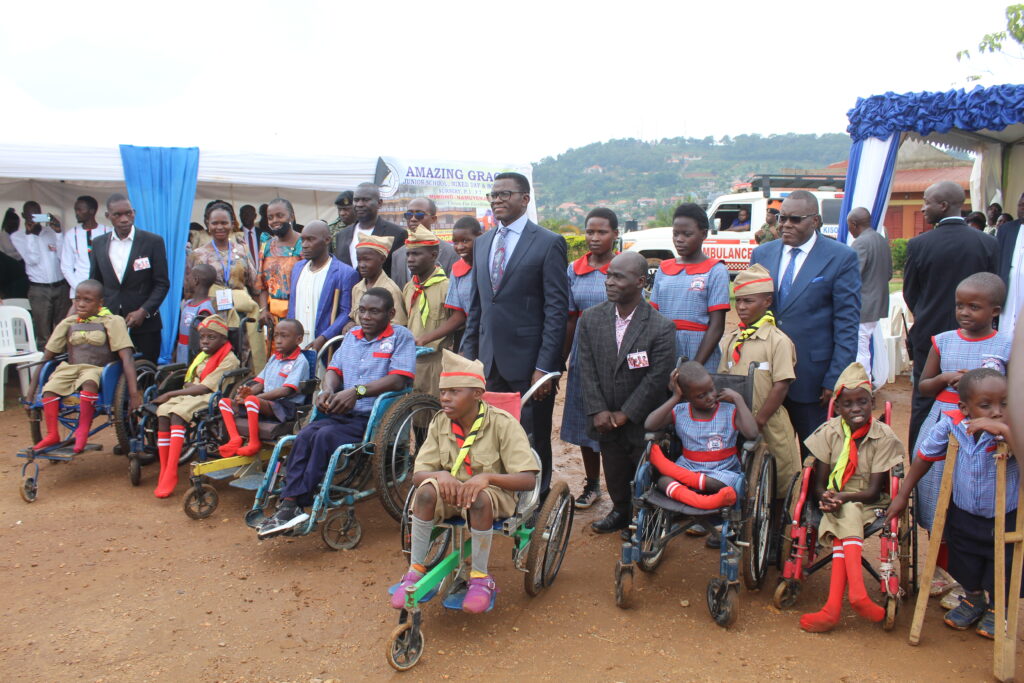 Katikiro Charles Mayiga with Goodsamaritan disabled children.
Buganda’s Katikiro, Owek. Charles Peter Mayiga warned Buganda kingdom county chiefs against corruptions and mishandling the kingdom’s property Mayiga was handing over the 5 million checks and the trophy to Kyagwe county chief as the overall winner in the bulungi bwansi competition which runs annually all over the Kingdom

At the event held at the county headquarters in Mukono, it attracted a number of people from Kyagwe County with lots of entertainment from schools.

In his speech the kingdom premier warned that all the Kabaka’s chiefs caught involved in corruption and money misappropriation in their respective provinces will be arrested.

“ I don’t want to see the corruption in the central government in the Buganda government and whoever is caught stealing even a pencil will be arrested” Said Mayiga.

He also urged the people of Kyaggwe to be supportive on the issue of federal governance which he said will help in delivering services to the people and improve the flow of work. And this will help deliver social services, children’s education, comfortable accommodation, job creation and more.

Local Government Minister Buganda Kingdom Joseph Kawuki urged the chiefs to focus on leadership that communicates well and makes recommendations and implements them, he further urged them to avoid confrontations and to ensure that they learn from each other.

The Kyagwe chief Elijah Lubanga Mulembya, thanked the king for his concern for his people and the construction of houses for them, Mulembya noted that it was a concerted effort amongst the leadership of the districts in Kyagwe that contributed to the win.

Later the Kyagwe leaders received the trophy and other counties, as a sign of appreciation the Mukono Pentecostal fraternity led by Bishop Samuel Lwandasa awarded the Katikiro thanking him for the work done in the Kingdom.