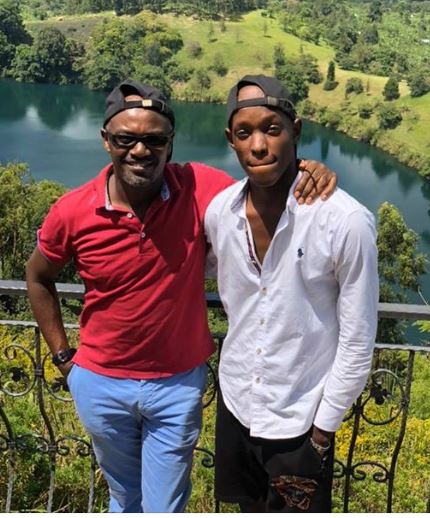 Popular journalist Andrew Mwenda, of the Independent Magazine, on Monday published a heartfelt eulogy for one of his  friends identified as Phil Manzi, who passed away over the weekend due to lymphoma cancer.

Here below is Mwenda’s touching eulogy  for his fallen pal;

“Phil Manzi, A Lesson In Greatness

I had organized to go visit him this morning and got the sad news just after midnight. Why does death suddenly rob the world of such a young soul whose future was ahead of him!?

I met Phil January last year and was immediately struck by his boundless energy, free spirit, kind heart, intelligence and friendliness! Immediately after I had met him, cancer struck!

Most people are broken by such heavy blows; but Phil was strong in those broken places! For many, cancer is a death sentence; a reversal of fortune, a source of despair! For Phil, it was a moment of reflection and hope! Rather than put him down, cancer gave him a new purpose and meaning to life.

So he created Milele Foundation, raised money, mobilized friends, and set out to help those who are poor, vulnerable, sick, disabled and hopeless! He worked and walked through prisons, hospitals, slums and streets! He took hope to those who had little or none by mobilizing supplies of all kind and taking them to those who needed them most!

In these efforts, Phil made those who were hurting and lonely feel they were loved and special! He played and prayed with them and comforted them! This gave them renewed hope and reinvigorated them with purpose and meaning in life! One could see how his efforts brought real change in their faces!

Phil, an 18 year old kid, did all this while battling a life-threatening cancer and which he fought with determination and hope! He kept his friends and made new ones, reached to everyone regardless of their age or status in life. And no one who met him knew he had cancer! I was one such lucky person he admitted into his confidence!

Yet initially for the many times we met, traveled together, ate together, and talked long and deep, he had kept this secret from me! Then a friend told me about it with a warning not to tell him I knew. One day he came to see me and told me! I feigned shock and was cross with him for not telling me all along!

“Look old man,” be told me sounding like a 50 year old person, “I don’t want to be pitied! I don’t want to worry people or trouble them! Cancer is a blessing from God that has given me new meaning and purpose in life! That is why I created the Milele Foundation.”

I was dumb struck, so young in age yet so mature in thought! Where many saw walls, Phil always built bridges; where others were angry at the blows dealt them by life, Phil found hope because disaster gave him purpose! Where others in crisis lash out with venom denouncing self-invented social enemies to blame for their woes, Phil saw opportunities to help others instead!

Phil was great because he always saw hope where others saw despair; he was positive when many things around him should have made him despondent! When I look back at his life, I feel bad I did not spend much time with him, listen to him more, learn more from him and use his example to other young and old alike that our lives are our responsibility; that no matter our condition we can change our circumstances!

By end of last year Phil had recovered fully from the cancer! He came to see me again, this time with his auntie Erina Kagasha, a young, pretty, energetic and articulate lady whose zest and warmth are infectious. He wanted to go study in the UK. I was helping him secure a scholarship! But the cancer returned with renewed vengeance! He was rushed to the Cancer Institute at Mulago!

I went to see him and again found Phil with hope! Phil always had plans! In our discussion he looked to the future, almost ignoring his present. He never wanted to draw attention to his problems but always to his plans. Had he lived longer, Phil would have changed the world, because he always so unlimited possibilities in it.

At Mulago, I called the best of our cancer doctors at the institute including its head, the competent and passionate Dr. Jackson Oryem, and the indefatigable Dr Abraham Omoding. They took the best care of him! I spent the entire afternoon at the hospital and left with hope that Phil would recover. Sadly he hasn’t! Just before midnight last night he breathed his last!

Finally a word on faith! Phil was a true Christian! That was the source of his everlasting hope! Phil has not died! He has just left this world for the next! He believed life on earth was only transient, a brief moment in a journey to life eternal. To his family, especially his dad Col. Katwekire, to whom this blow is too hard to bear, please remember this fact and find comfort in it.

Phil, you lived a very short yet fruitful and fulfilling life! You touched the hearts of thousands and brought hope to millions! You achieved in 19 years what most human beings don’t achieve in a lifetime of 70 years! You have served this world with dedication and distinction. Your works will outlive you and have created a magnificent monument in the minds of those you touched. Fare thee well my great friend.

May your soul rest in eternal peace!