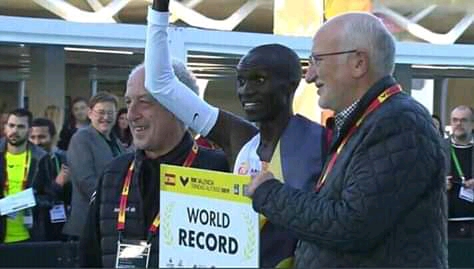 Celebrated  athlete Joshua Cheptegei has hoisted Uganda’s flag high again after he  broke the world record of a 10,000-meter road race in Valencia, Spain on Sunday.

But it should be noted that Cheptegei had just won world titles in cross-country and track this season.

The Ugandan athlete doubled his stimulators before halfway and was alone the rest of the race in the eastern city of Spain.

“Champion of the world of cross in Denmark, world champion of the 10,000 meters in Doha and now the world record here in Valencia. What a year it was, “said Cheptegei, 23, according to the IAAF.

He added that “I can not believe! I knew Valencia was going to be a very fast course, one of the fastest in the world. So, to come to realize what we came here is something really special. “