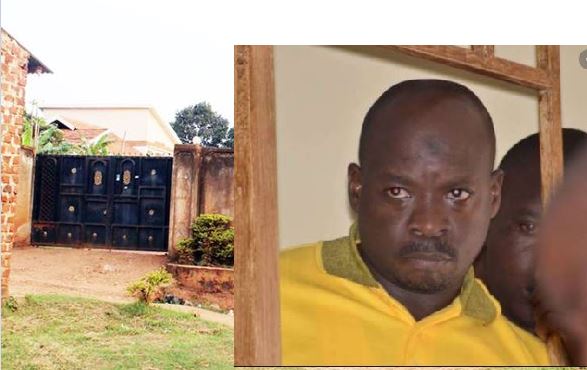 The man is currently caged at Luzira prisons, where he is serving a jail sentence of 8 years after he was convicted of illegal possession of firearms by the General Court Martial in 2019.

But while he is serving his jail term, we have learnt that Kitatta’s property is being seized by people he left on the outside.

Elite News has learnt that a few days ago bailiffs seized Kitatta’s house in Najjanankumbi, off Entebbe Road, with intent to auction it.

The area LCI Chairperson Muhammad Ssekandi, said that “Bailiffs accompanied by police officers from Katwe police station surrounded the house on Wednesday morning at around 4:00 Am and entered through the gate, with intent to evict the occupants.

Armed with a court order and other documents, the bailiff ordered the maid to start carrying the household property out.”

Ssekandi added that “It was at that moment that I was called to intervene as the area Chairperson.

At first they didn’t recognize me because they hadn’t informed me about the eviction and when I introduced myself, they told me that they had informed the police.”

Ssekandi revealed, however, that after a lengthy argument and discussion between him, the police and bailiffs, the latter agreed to vacate the property.

He however revealed that the bailiffs informed him that the person who sold the land to Kitatta did so illegally and wrongfully, because the land had been staked as security for a loan in a commercial bank.

Commenting about the matter, Kampala Metropolitan Police spokesperson Patrick Onyango confirmed that indeed bailiffs accompanied by police had gone to Kitatta’s house to effect court orders, but their efforts were frustrated.

Kitatta was the chairperson of the ruling NRM party for Rubaga Division at the time of his arrest on January 20 last year. He was arrested at Vine Tea Hotel in Wakaliga, Rubaga. His detention came after a group of people attempted to block the arrest of his brother Huzairu Kiwalabye, who was charged with the murder of former Case Hospital accountant Francis Ekalungar.