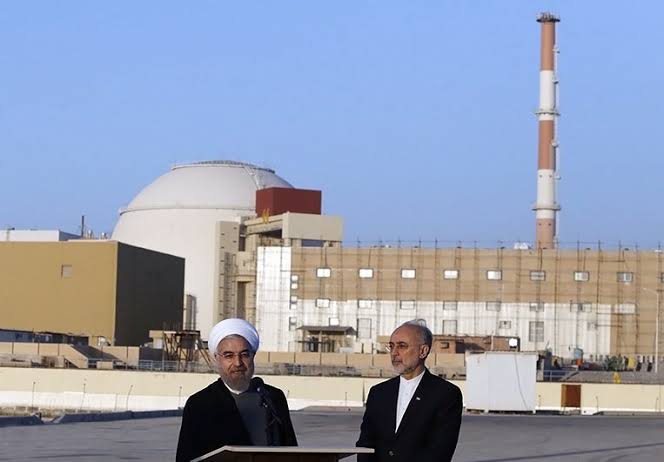 The government of Iran has said it is ending commitments to all international Nuclear Deals and will no longer limit Uranium enrichment like has been the case before.
Tehran rolls back landmark deal in wake of U.S. assassination of the top Iranian general Qassem Soleimani

Iran said Sunday it would no longer abide by any of the limits of its unraveling 2015 nuclear deal with world powers after a U.S. airstrike killed a top Iranian general Qassem Soleimanni in Baghdad, Iraq.
The development will see Iran abandon the accord’s key provisions that block Tehran from having enough material to build an atomic weapon.

Iran insisted in a state television broadcast it remained open to negotiations with European partners, who so far have been unable to offer Tehran a way to sell its crude oil abroad despite U.S. sanctions. It also didn’t back off of earlier promises that it wouldn’t seek nuclear weapons production.

Meanwhile,  Iran has placed an $80million bounty on American President Donald Trump’s head following the death of General Qassem Soleimani.
However,  on Monday,  the US military sent a letter to the Iraqi military announcing the “onward movement” of US troops “in due deference to the sovereignty of Iraq and as requested by the Iraqi Parliament and the Iraqi Prime Minister”. Pundits contend that this could be a tactical withdrawal.

WHO’S MAJ GEN QASSEM SOLEIMANI?
Qassem Suleimani or Qassim Soleimani, was an Iranian major general in the Islamic Revolutionary Guard Corps (IRGC) and from 1998 until his death, commander of its Quds Force, a division primarily responsible for extraterritorial military and clandestine operations.
Soleimani was born on 11 March 1957 in the village of Qanat-e Malek, Kerman Province, to an impoverished peasant family.
Soleimani was a Persian from Kerman. His father was a farmer who died in 2017. His mother, Fatemeh, died in 2013.
He came from a family of nine and had five sisters and one brother, Sohrab, who lived and worked with Soleimani in his youth.
Sohrab Soleimani is a warden and former director general of the Tehran Prisons Organization. The United States imposed sanctions on Sohrab Soleimani in April 2017 “for his role in abuses in Iranian prisons”.
Soleimani had dan in karate and was a fitness trainer in his youth. He had four children: two sons and two daughters.
In his youth, he moved to the city of Kerman and worked as a construction worker to help repay a debt his father owed.
In 1975, he began working as a contractor for the Kerman Water Organization.When not at work, he spent his time lifting weights in local gyms and attending the sermons of a traveling preacher, Hojjat Kamyab, a protege of Ayatollah Khomeini.
Soleimani began his military career in the beginning of the Iran–Iraq War of the 1980s, during which he eventually commanded the 41st Division.
He was later involved in extraterritorial operations, providing military assistance to Hezbollah in Lebanon.
In 2012, Soleimani helped bolster the Syrian government, a key Iranian ally, during the Syrian Civil War, particularly in its operations against ISIL and its offshoots.
Soleimani also assisted in the command of combined Iraqi government and Shia militia forces that advanced against ISIL in 2014–2015.
Here, we bring to you the battles the late Gen Qassem Soleimani was able to fight before he was called to be with the Lord:
Kurdish Rebellion (1979)Iran–Iraq War (1980–1988)
Operation Tariq-ol-Qods (WIA) – Soleimani regarded this as the best operation he ever participated in. Operation Fath-ol-MobinOperation Beit-ol-MoqaddasOperation RamadanOperation Bazi-Deraz 2Operation Omm-ol-HasanaynOperation Before the DawnOperation Dawn (1983)Operation Dawn 3Operation Dawn 4Operation Dawn 5Operation Dawn 6Battle of the MarshesOperation KheibarOperation Badr (1985)Operation MeymakFirst Battle of al-FawOperation Dawn 8Operation Karbala 1Operation Karbala 4Operation Karbala 5Operation Karbala 6Operation Karbala 10Operation Beit-ol-Moqaddas 7Second Battle of al-FawOperation Dawn 10Operation Nasr 4Operation MersadKDPI insurgency (1989–96)
South Lebanon conflict (1985–2000)
Invasion of Afghanistan
2006 Lebanon War
Iraq War
Karbala provincial headquarters raidIran–Israel proxy conflict
Gaza–Israel conflictSyrian Civil War
Al-Qusayr Battle (2013)

Operation Breaking Terrorism
Soleimani was killed on 3 January, 2020 around 1:00Am local time (22:00 UTC on 2 January), after missiles shot from American drones targeted his convoy near Baghdad International Airport. He had just left his plane, which arrived in Iraq from Lebanon or Syria.

His body was identified using a ring he wore on his finger, with DNA confirmation still pending.
Also killed were four members of the Popular Mobilization Forces, including Abu Mahdi al-Muhandis, the Iraqi-Iranian military commander who headed the PMF.
The airstrike followed attacks on the American embassy in Baghdad by supporters of an Iran-backed Iraqi Shia militia and the 2019 K-1 Air Base attack.

The United States Department of Defense issued a statement that said the U.S. strike was carried out “at the direction of the President” and asserted that Soleimani had been planning further attacks on American diplomats and military personnel and had approved the attacks on the American embassy in Baghdad in response to U.S. airstrikes in Iraq and Syria on 29 December 2019, and that the strike was meant to deter future attacks.
He was succeeded by Esmail Ghaani as commander of the Quds Force.