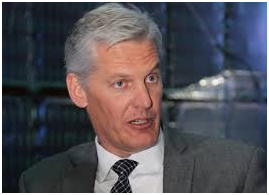 Yields on Eskom’s 2021 dollar bonds jumped the most in more than three months after the appointment of Andre de Ruyter as Chief Executive Officer on Monday, showing that bond investors aren’t showing much faith in the utility’s new boss, reports Bloomberg.

The premium of two-year over 10-year dollar yields narrowed, suggesting investors are concerned De Ruyter won’t be able to address the debt-laden firm’s short-term challenges, says the news agency. De Ruyter, currently CEO of packaging company Nampak, has considerable corporate experience, though not at a utility.

His appointment comes at a time when Eskom is undergoing a transformation that will require technical and financial knowledge as well as an ability to deal with the government and labour unions.

Bloomberg highlights the R138bn ($9.3bn) government bailout, which has bought it just two years to effect a turnaround, and deal with its R450bn of debt.

Meanwhile, the National Union of Mineworkers (NUM) rejected the appointment of De Ruyter and described him as “a white outsider”. NUM is the majority union at the struggling power utility.

NUM president Joseph Montisetse said: “That white man is not even from Eskom. He has no knowledge at all about the workings of Eskom and he’s coming [from] outside of Eskom. We reject this appointment because it is based on a setback,” he said.

Montisetse said the government and the Eskom board overlooked black executives who were equally qualified for the job.
“The race matters, we are coming from a past whereby black people were marginalised and continue to be even today.”

After a four-month search, the current CEO of Nampak was announced on Monday as the man to lead the embattled power utility.
• There was mixed reaction to De Ruyter’s appointment with unions describing it as a setback for transformation.
• On Tuesday, acting director general at the Department of Public Enterprises Kgathatso Tlhakudi said it was unfortunate.
• “It’s an unfortunate view because we have to start looking at these appointments in totality in terms of the makeup of the executive team in Eskom. As you will appreciate, the CEO doesn’t work alone and in any case, we also have to be objective when we say these things,” Tlhakudi said.
• At the same time, Business Unity South Africa has described the appointment of De Ruyter as an important step to stabilising the management, operations and finances of the utility.
• Busa CEO Busisiwe Mavuso said: “He’s very much aware of what confronts the organisation in terms of challenges and he’s ready to actually hit the ground running. We have no doubt that he will precisely that.”

• De Ruyter would take over from board chairperson Jabu Mabuza, who was acting CEO since the departure of Phakamani Hadebe at the end of July.
The question remains; Will this affect its operations in other countries like Uganda?