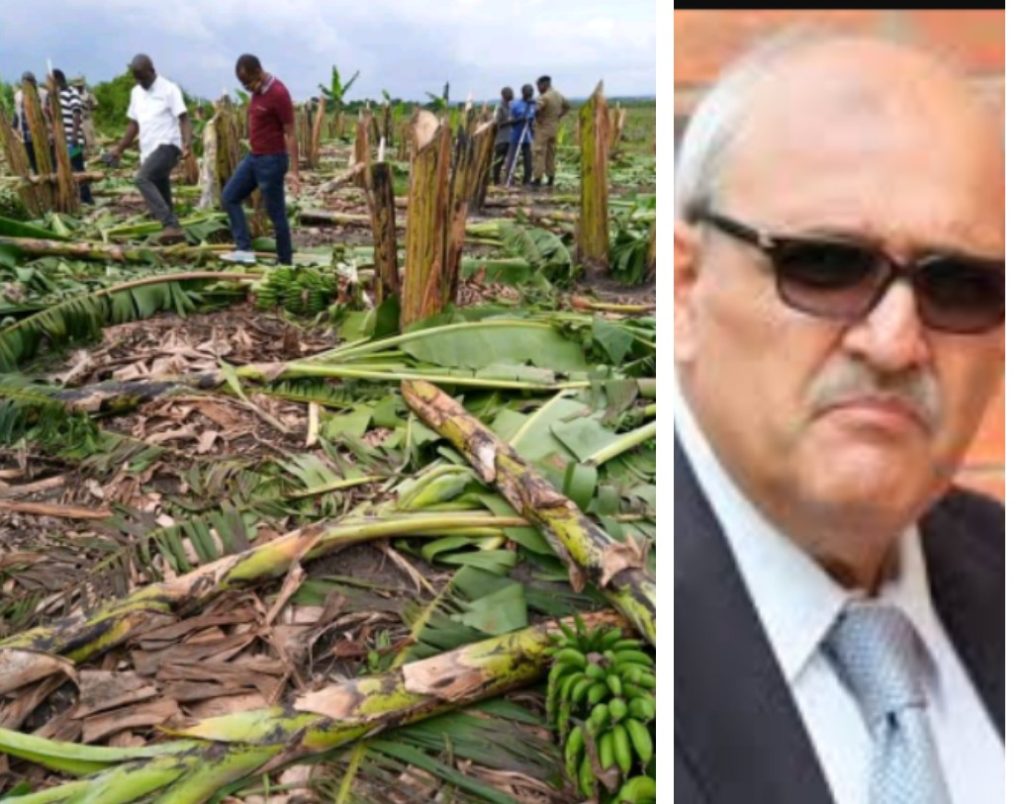 While Uganda is struggling to come to terms with the disastrous effects of the deadly Coronavirus (COVID-19) on Asian businessman Abid Alam is shamelessly destroying people’s homes and gardens on Mubende district, so as to grab their land.

We have learnt that over the weekend, Abid Alam hired a gang of over goons  who  destroyed several houses and plantations in Nalutuntu Sub-County in Kassanda South Constituency, Mubende district, before evicting helpless locals from their land.

While commenting about this heinous crime which was committed in the presence of the area policemen who even provided security to the goons as they destroyed the property,  MP Simeo Nsubuga wrote thus on social media;
“As we are in the quarantine to prevent the spread of covid19, On Saturday night over 60 workers/kanyamas of Abid Alam an Indian investor attacked the farm of Mr. Mugyenyi Arthur who is a resident of Bukoba village, Nalutuntu  Parish, Nalutuntu Sub-County in Kassanda South Constituency.

During the attack they cut the head of Mr. Kyabale Samuel the cattle keeper of Mr. Mugyenyi, gang-raped his  wife in front of  the children and the husband, destroyed two houses, cut down a 3-acre Banana Plantation, took away 200 cows and 50 goats as you can see the pictures.

Before this incident happened, Abid Alam, his son  and his kanyamas spent the whole of  Saturday 04/4/2020 at  the farm planning on how to commit these crimes and he left the place at 6pm.

This is not the first time that these serious crimes have been committed against my people. Last year alone about 3 people were killed in Bukoba and Bukompe villages by workers of Abid Alam, some suspects were arrested and later  set free due to corruption tendencies.

As the Area MP, together with my voters we have tried our level best to report these  matters to relevant authorities; we reported to police and several case files have been opened but none has been successfully prosecuted.

I have advised my people to go courts of law and open up civil suits against Abid Alam and there are over 5 cases in Mubende High court and Kampala high court (land division) involving Abid Alam and in fact Mr. Mugyenyi Arthur took him to court and secured a court injunction stopping Abid Alam from encroaching  on his land.

In this particular the incident of Saturday night, it was commanded by one of his managers by names of Akim Zirimenya, he has been in police cells on charges of murder and was  released on Police Bond about 3 weeks and Abid Alam was his  surety.

As the People’s representative I will continue to use all the available legal avenues to expose the criminal acts of Abid Alam and his workers/kanyamas against my people and I call upon the security organs of this country to ensure that this time around Abid Alarm and his agents are charged in courts of law.”

However, many of the affected locals were overheard wishing that former President Gen. Iddi Amin Dada was alive, because during his reign such nonsense of Indians grabbing land from Ugandans was unheard of!