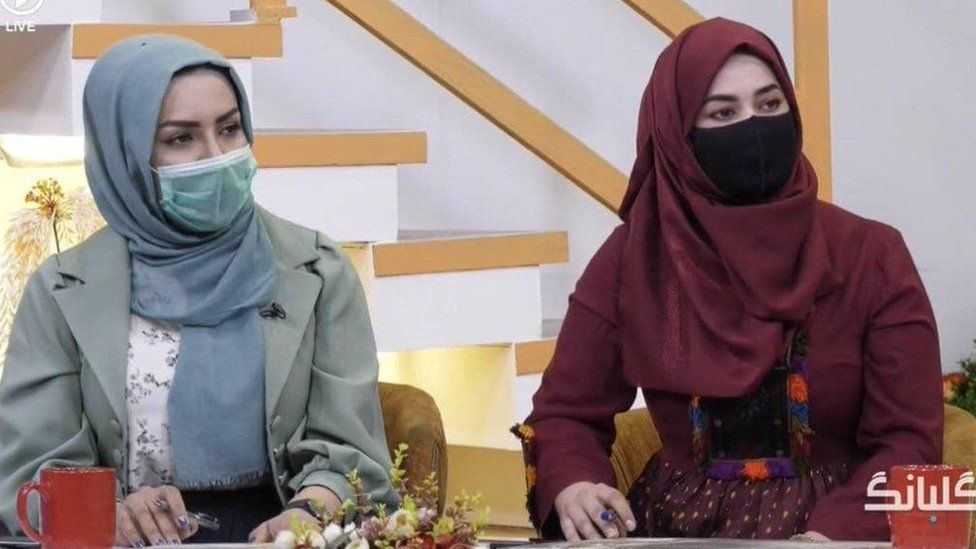 Sunday, in line with a Taliban order.

The day before, some of them had defied the edict and kept their faces visible.

One presenter said women working in TV had resisted but their employers had come under pressure.

Wearing hijabs and face-covering veils, women presented and reported on news bulletins and other programmes across popular channels such as TOLOnews, Ariana Television, Shamshad TV and 1TV.

TOLOnews presenter Farida Sial told the BBC: “It’s OK that we are Muslims, we are wearing hijab, we hide our hair, but it’s very difficult for a presenter to cover their face for two or three hours consecutively and talk like that.”

She said she wanted the international community to put pressure on the Taliban to reverse the edict.

“They want to erase women from social and political life,” she said.

Earlier the Taliban’s Ministry for the Prevention of Vice and the Promotion of Virtue ordered that all women must wear a face veil in public, or risk punishment – which was extended to TV presenters from Saturday.

After some women initially refused to comply, a Taliban official said they would talk to the managers and guardians of the presenters, who face the prospect of being penalised.

Sonia Niazi, a presenter with TOLOnews, told the AFP news agency: “We resisted and were against wearing a mask.”

But she said the channel was pressured and told that the female presenters must be moved to other jobs or sacked if they did not comply.

Khpolwak Sapai, the channel’s deputy director, said in a post on Facebook: “We are in a deep grief today.”
Another female Afghan journalist, who asked not to be named, told the BBC: “Today is another black day for the women of my country.”

And a senior TV executive said many female presenters fear the next stage will be to take them off air completely.

Most Muslims around the world do not consider women covering their faces in public to be a mandatory part of the religion, and the Taliban initially appeared to be adopting a more flexible approach after seizing control of the country in August last year.

But in recent weeks, they have imposed a series of restrictions on women’s lives, including assigning separate days for them to visit public parks and barring them from making longer journeys without a male guardian.