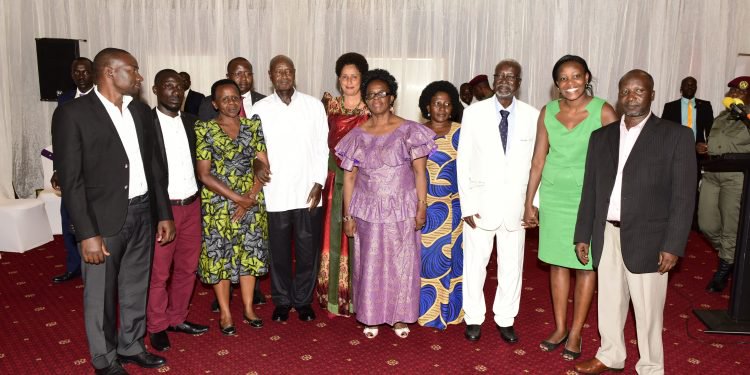 President Museveni has said that Ignatius Kangave Musaazi falls in the same category as the likes of South Africa’s Nelson Mandela who filled the vacuum when Africa was leaderless and down.

According to President Museveni, it is not possible to mention people like I.K Musaazi without talking about Africa, because they were the glue the united the continent to put up resistance in the face of colonialism.

Museveni made the remarks Friday at Sheraton Kampala Hotel, during a fundraising dinner for the I.K Musaazi Innovations Institute.

The fundraising dinner was organized by Musaazi’s family together with Uhuru Institute for Social Development.

“You can not talk of I.K Musaazi without talking about Africa, that is how he gains his relevance. For colonialism to happen, Africans got the first visit of Vasco da Gama, and 364 years later, another group of Europeans came with the likes of James Hanington. This means that Africa had an entire 364 years of warning that some people were coming and still we did not prepare, colonialists found us sleeping and our kings engaged in small wars against each other. What sort of people are we? By 1900, the entire Africa with the exception of Ethiopia was conquered, that in itself is a dangerous fact,” he said.

“The good thing is that Africans don’t die easily, and this is how the likes of Musaazi came in. Musaazi came in because Africa was in danger, the chiefs had failed to defend us, some like Kabalega and others tried but it was too late,” he added.

Museveni said he salutes Musaazi because he filled a leadership vacuum when Africa was leaderless and down, forming the first political party in Uganda, which he used to mobilise the masses. He also commended Musaazi for engaging other tools to mobile resistance.

“I salute him because he filled the vacuum. Africa was leaderless and down. He was one of those who came to lift Africa up. In his mission, Musaazi used different tools; Political tools through a political party (the Uganda National Congress), Economic tools through corporative and labor unions.”

“So when we talk about the end of colonization, we refer to two factors that gave us back the independence, the first is greed by colonial masters, who during the scramble for Africa ended up fighting each other and losing grip of Africa and the second aspect is people like I.K Musaazi, who took up the resistance.”

He made a Shs100m cash pledge towards the construction of the I.K Musaazi Institute and also promised to ‘sell a few of my cows to contribute towards this innovations institute so the family can start the institute as not only as an acknowledgment of Musaazi’s contribution to this nation, but also to serve as an inspiration to young people and continuation of Musaazi’s wishes for this country.”

Mr Kirunda Kivejinja labeled Musaazi, the grandfather of Uganda’s peace, urging the family to put up a gallery of Musaazi’s activities that shaped Uganda.

“Every nation has heroes, every country has those who change people’s lives, and those are the people who organize others to bring about peace. Musaazi was that person for Uganda,” Kivejinja opined.

Elizabeth Musaazi, the chairperson of the I.K Musaazi Memorial Foundation said the Innovations Institute will carry on the unique legacy of Musaazi.

“Being buried at the heroes’ corner in Kololo is well-deserving for Musaazi, but an institute will be even better,” she said.