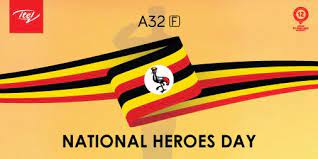 Following the overthrow of Idi Amin in 1979, Milton Obote was elected President of Uganda.

The opposition party believed the election was rigged and this led to Yoweri Museveni forming the National Resistance Army (NRA).

On June 9th 1981, at the start of the Ugandan Bush War, Edidian Mukiibi Luttamaguzi was killed by the Uganda National Liberation Army for refusing to reveal the hiding place of Museveni and the soldiers of the NRA.

If Luttamaguzi had not made the ultimate sacrifice to protect the soldiers, the ensuing guerrilla war that brought the National Resistance Movement to power in 1985 could have ended in defeat.

The war ended with victory for the NRA on January 25th 1986, with Yoweri Museveni becoming President in 1986, a position he holds to this day.

In 2001, an act was passed in the Parliament of Uganda which recognised the June 9th as Heroes’ Day in remembrance of those who contributed to the liberation struggle that ushered in the National Resistance Movement government on January 26th 1986.
.by kazibwe Emma.