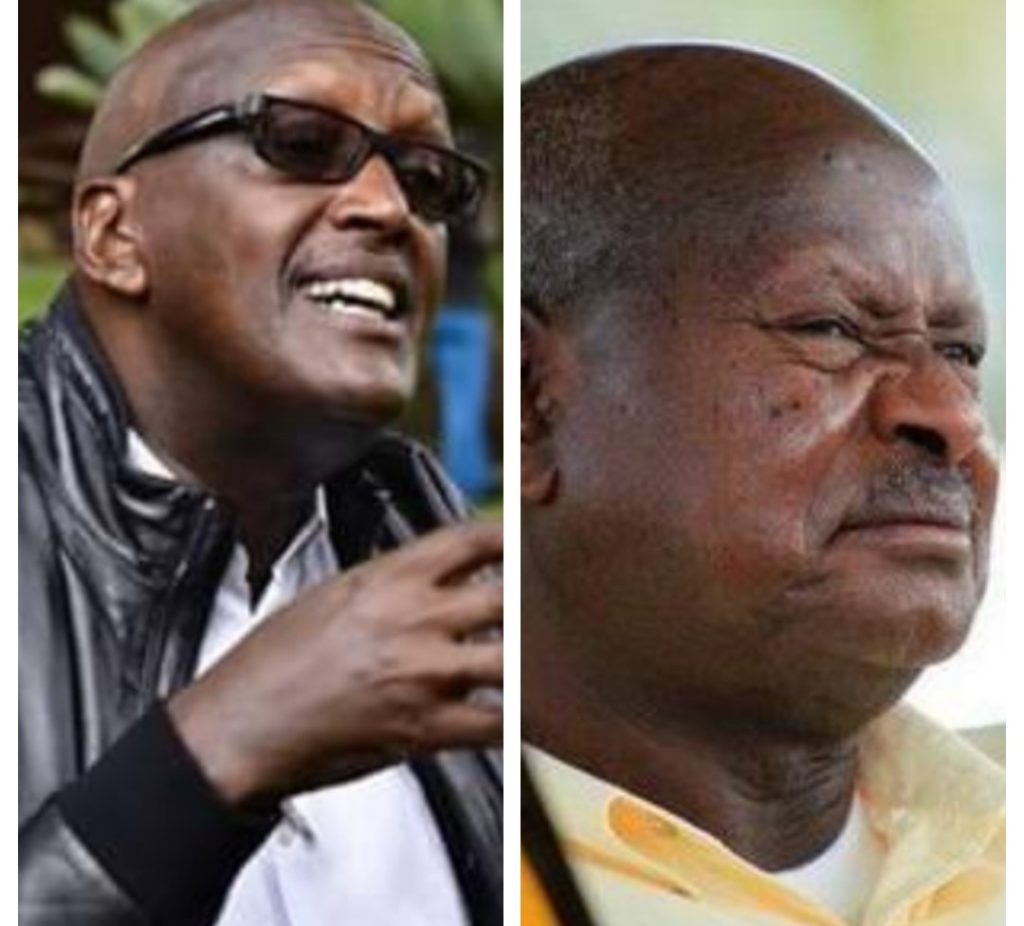 Lt. Gen. Henry Tumukunde has sparked off internal strife within the Uganda Peoples Defence Forces (UPDF) ranks after President Yoweri Museveni, as Commander In Chief, ordered the withdrawal his army bodyguards, after word leaked that the  former Security minister wants to contest for Presidency in 2021.

Sources reveal that Tumukunde’s security details  at his Kololo and Rukungiri homes were given marching orders early this week, since he is no longer a serving officer under the UPDF.

Close sources to the retired General confirmed the development and revealed  that an order to withdraw guards was issued last weekend when  Tumukunde was upcountry.

“It is true all the guards have been recalled  to Bombo and we are wondering why now, because he is entitled to security from the UPDF as a retired General,”  a source told our reporter yesterday.

Insiders reveal that  Gen. Tumukunde is under close watch ever since he started going around mosques, churches, community halls and others places holding consultative meetings.

Although last year he claimed to be holding Consultative meetings for the Kampala Lord Mayor’s office, it is said word leaked to his former Senior Commanders that he is actually nursing presidential ambitions.

The fact that Gen. Tumukunde wants to oust his former boss’m Gen. Museveni, who is also the Chairman of the National Resistance Movement (NRM) party, in 2021, has sparked off unease not only in the NRM but also within UPDF ranks.

This, according to our sources, is because there are many people both within the NRM and UPDF, CMI, Police, plus several other private and private institutions that would rally support for Tumukunde should he declare his resolve to contest for Presidency in 2021.

Intelligence indicates that apparently, the sophisticated army general has been silently  mobilizing masses across the country and sources reveal that in most parts of Uganda he has been endorsed by some voters and Bush War heroes, among then members/ generals of the high command, something that it pitting him against  the Occupants of State House.

Gen. Tumukunde At a Glance
He was born on February 28,1959 in Rukungiri District in the Western Region. He attended Bishop Stuart College Demonstration School for his primary schooling.

He studied at Kigezi College Butobere (Siniya) and Kibuli Secondary School for his O-Level and A-Level education, respectively
Tumukunde graduated from Makerere University with a Bachelor of Laws degree in 1981.

He later obtained a Diploma in Legal Practice awarded by the Law Development Centre in 2010. He also holds an Executive Masters in Oil and Gas Management, awarded by the Graduate Institute of Geneva in 2013.

Tumukunde In NRA Liberation War
It said that during his time at Makerere University, Tumukunde was involved in anti-government politics, which subsequently led to his joining of then rebels, the National Resistance Army, led by President Yoweri Museveni.

Tumukunde was hounded by the government security services during his last year at the university and on completion, decided to join the struggle, along with two of his friends at the time, Major General Mugisha Muntu and Colonel Jet Mwebaze.

Obote’s security services at the time caught wind of their impending departure for the bush and mounted an attack on the NRA’s transit house (shop) in Kampala.

It is said that Tumukunde alongside Muntu posed as shopkeepers, surviving what would have been sure torture and death. In the early stages of the war, Tumukunde was a machine gunner and eventually went on to become one of the senior officers in NRA, indicated by his senior number RA 0111.

However, in 1985, during one of the bigger battles with the Uganda National Liberation Front in Luweero District, Tumukunde was shot multiple times in his legs. The wounds were so major that it was thought he would not survive. But he was smuggled out of the country to Nairobi and eventually to London where he was operated upon.

After the NRA captured power, Tumukunde was promoted to the rank of major and appointed first secretary and military attache at the Ugandan High Commission in the United Kingdom.

Tumukunde served in this role for many years and was very instrumental in the setup of formal military structures in the UPDF, which had until then been a rebel army.

In 1994, Uganda held elections for the Constituent Assembly and Tumukunde sought to represent his home county Rubaabo. His main competitor was Prof. Mondo Kagonyera.
Tumukunde, who was in early thirties then, was thought to be the underdog in the race. However, he was a very good mobiliser and won by a landslide margin.

Tumukunde then joined the CA, which formulated the current 1995 Ugandan Constitution. Tumukunde was known to be a regular and astute contributor to the sessions and debates that preceded the formation of the Constitution.

Following the set-up of the constitution, Uganda held elections and Tumukunde subsequently became a Member of Parliament representing the Army as a special interest group.
He went on to serve as an MP until 2005.

His tenure was arguably the most successful by any officer as it is during this time that Al-Qaeda’s plan to bomb the American Embassy was thwarted.

There was also a time where bombings were rampant within the capital Kampala, and once again Tumukunde formed several intelligence committees within the city and the problem was managed.

Tumukunde also built an amicable rapport with the Muslim community, which many had accused of spearheading the attacks, so much so that key intelligence information was forwarded to him with ease. Arguably, it was during his reign that the Ugandan intelligence apparatus was at its most efficient.

Tumukunde was later promoted to Brigadier General and transferred to command the UPDF Fourth Division based in Gulu. At the time, the war with the LRA was ongoing and Tumukunde made significant headway during  as division commanding officer in diminishing the threat of the LRA.

It was also at the time when Ebola outbreak was first reported in Northern Uganda and Dr. Mathew Lukwiya and Gen. Tumukunde swung into action but bad enough Dr. Lukwiya lost  the Ebola battle.

During his time at ISO, Tumukunde set up structures that returned ISO to being the country’s foremost Intelligence gathering body, just as he had done with CMI.

The Internal Security Organisation became renowned for its efficient and effective approach towards intelligence and counter-terrorism.

Gen. Tumukunde -Gen. Museveni Fallout
Tumukunde’s fast rise to the upper echelons of both the political and military scene in Uganda marked him out as one of Uganda’s most popular and well-known figures. Soon with  his very strong minded and unrelenting dedication to his country, Tumukunde created many adversaries around him.

At a political retreat in 2003, Tumukunde, in the presence of the President and his cabinet, argued against the impending removal of term limits that would give President Museveni the right to stand for re-election on an infinite basis.

Tumukunde stated that this would be in direct contravention of the rights that they fought to establish and that he was not willing to take part in what he considered to be grossly unconstitutional behaviour. Predictably, this put him at loggerheads with the establishment and more so the President.

Tumukunde Arrrested For Abuse of Office
It was not long before Tumukunde got arrested  and charged with the offences of abuse of office and spreading harmful propaganda.

The abuse of office charges were eventually dropped in a manner which suggesed that they had been politically motivated in the first instance.

Thereafter Tumukunde was on May 28, 2005, forced to resign from Parliament and subsequently arrested on the orders of President Museveni.

His home was surrounded by at least 50 soldiers commanded by then Brig. Kale Kayihura and Brig. Joshua Masaba who proceeded to arrest him.

Gen. Tumukunde was then driven in a tightly guarded convoy to the officers’ mess turned detention center in Makindye, where he was incarcerated for nearly two years, during which he had limited and tightly controlled contact with the outside world.

His extrajudicial detention coupled with a series of controversial and uncertain court martial hearings seemed to backfire leading to irreversible pressure culminating into his release in 2007.

His arrest was motivated by his opposing the “third term” project that suggested a revision to the Ugandan constitution enabling one to serve more than two terms as president as was the case at the time.

On April 18, 2013, the UPDF General Court Martial sat to bring an end to the process that had lasted eight years and summed up its deliberations.

The charge of spreading harmful propaganda was dropped while the joint charge of military misconduct was upheld and Tumukunde was subsequently sentenced to a severe reprimand.

Tumukunde Promoted,  Retired  and Given Bodyguards

In September 2015, Tumukunde was promoted to the rank of Lieutenant General and then retired from the Army.

On June 6, 2016, he was appointed to the Cabinet as the Minister of National Security. However, he was later reshuffled  on the evening of Sunday, 4 March 2018,  he was fired together with former Inspector General of Police (IGP) Gen. Kale Kayihura, in a presidential tweet.

But last year Tumukunde surprised many Ugandans when he started mobilization for the 2021 Elections and although he claimed to be mobilizing for the Lord Mayor seat, intelligence has since leaked that he is eyeing the presidency, and this is making many of his bosses uncomfortable.

However, the directive for the withdrawal of his bodyguards could not be readily verified by the army publicist Brig. Gen. Richard Karemire, who wasn’t available online by press time.

But the move comes as a shock to many Ugandans, especially since it is the wake of government beefing security for high ranking army and police officers, MPs, Civil servants, and other officials