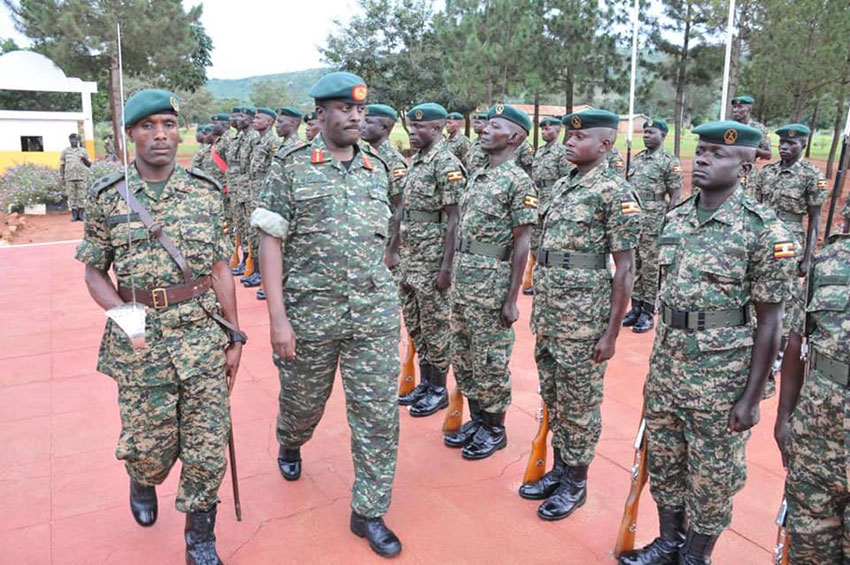 Gen. David Muhoozi, the Chief of Defence Forces, on Thursday flagged off a contingent of 2414 troops under Battle Group 29, who flew to Somalia to serve under African Union Mission in Somalia (AMISOM) for the next 12 months.

The function dispatch off the Battle Group  was held  at the Peace Support Operation and Training Center (PSO-TC), Nakaseke.

During the flag-off ceremony, Gen. Muhoozi told the battle group under the command of Col. Edward Kaddu to maintain high vigilance throughout their tour of duty in Somalia, because the enemy has an intelligence network that closely monitors UPDF combat readiness and can strike anytime.

The General advised the troops to maintain a healthy lifestyle so that they can remain effective and relevant. “The army wants you alive for your own good, for your family and for your country. It is your responsibility to keep healthy,” he said.

While at the same function, the Commander Land Forces, Lt. Gen. Peter Elwelu, told members of the Battle Group to observe maximum discipline during the conduct of their duties so as not to undermine the achievements Uganda has registered so far in AMISOM.

The UPDF has deployed in Somalia under African Union Mission in Somalia since 2007.
The Force also provides a United Nations Guard Unit to protect UN  workers in Somalia.

The troops have for the lastdecade been trained by partners from Europe and USA but this year, the pre-mission training responsibility was shifted to Uganda as the partners provide other mission needs such as equipment support.