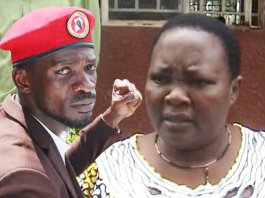 The pressure that People Power leader Robert Kyagulanyi aka Bobi Wine, the Kyadondo East Member of Parliament, is exerting on the ruling National Resistance Movement (NRM) party has started being felt far and wife, after disgruntled NRM stalwarts starting to defect.

The latest NRM bigwig to defect to People Power is Hon.Robinah Nabbanja, the former Woman  Member of Parliament (MP) for Kakumiro district, who has started seeing light in Bobi Wine.

Elite News has learnt that Nabbanja was seen over the weekend criticising her former boss president Yoweri Museveni  for taking money to the ghetto instead of giving it to his people who have supported him for long.

Nabbanja, who has never been deployed again by the NRM ever since she was outed from Parliament in 2016, is said to be planning for a comeback in   Kakumiro on People Power ticket come 202.

Actually over the weekend she was spotted a public function deeply hugging Bobi Wine and his son Kampala, before she heaped lots of praises on the ghetto gladiator turned politician.
Noeline Kisembo Basemera, a member of the ruling NRM, replaced Nabbanja in the 2016 election. Basemera polled 9, 637 votes to beat Lillian Kabalega of the opposition Forum for Democratic Change- FDC party, who got 2,801 votes.