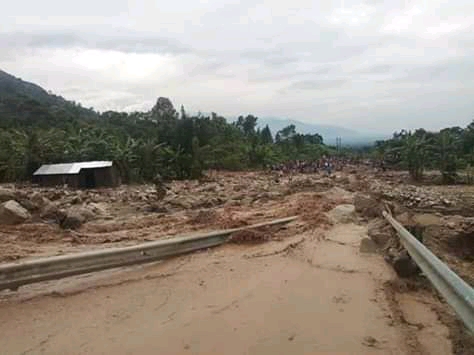 Residents and traders plying their trade along the Fort Portal – Kasese Road, which was recently refurbished, are stranded after heavy mudslides cut off the road point  that connects the two districts.

Our sources reveal that no vehicle, motorcycle or bicycle can cross over the damaged point and even pedestrians have to risk their lives to cross over.

However, by the time of filing this story the Uganda National Roads Authority (UNRA) was yet to issue a statement about the damaged road.

The heavy rains currently ravaging several parts of the country have resulted  into mudslides in Eastern and Western Uganda.

On  Saturday 11 bodies of people were recovered in Bundibugyo district after villages were hit by mudslides.

On Thursday , it was reported that 9 people had  died in areas of Bududa and Sironko districts, in Eastern Uganda, after mudslides ravaged four villages.