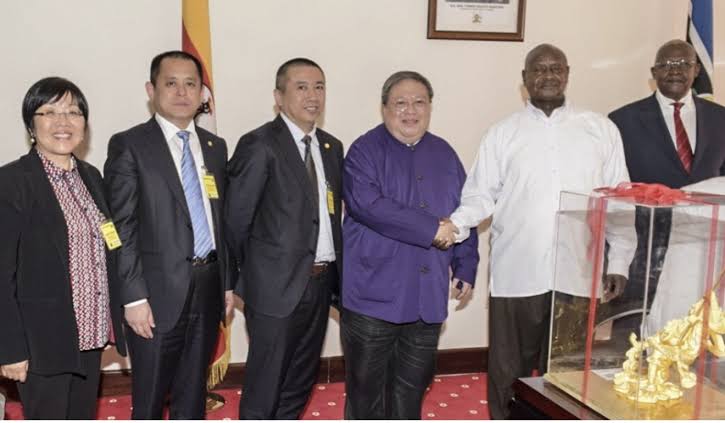 President Yoweri Museveni and  his Foreign Affairs Minister Sam Kahamba Kutesa are being investigated by officials in the United States of America over allegations that they received a bribe of USD500,000 from Chinese energy firm CEFC, so as to allow the Chi undertake operations in Uganda’s oil production and infrastructural development.

A top executive recommended that the chairman of a powerful Chinese energy company personally delivered a $500,000 cash “campaign contribution” to Gen. Yoweri Museveni during the Ugandan President’s 2016 inauguration, according to documents shown to jurors and read by Federal Bureau of Investigation (FBI) Special Agent Melissa Galicia in a bribe-and-money-laundering trial, in federal court in Manhattan, USA.

The payment was meant to conceal a bribe, and, in any case, the Ugandan election was on February 18, 2016 and the “contribution” and swearing in was three months later on May 12, 2016.

Jurors also saw bank records related to a USD500,000 wire transfer to an account controlled by Uganda’s foreign minister Sam Kutesa and his wife Edith, money the U.S. allege was part of a scheme to bribe Kutesa and open up opportunities for business ventures in the oil, rail construction, banking and finance sectors in Uganda.

Jurors also saw photographs of the defendant on trial, Chi Ping Patrick Ho, posing in a photograph with Gen. Museveni and Kutesa in Uganda, and in a separate picture, with Janet Museveni wife of Museveni, who wore a yellow dress, colors of the country’s ruling National Resistance Movement (NRM).

Ho was the head of a Nongovernmental Organization (NGO) affiliated with the United Nations (U.N) which also goes by the initials CEFC. It was funded by CEFC Energy; he is a former home minister in Hong Kong.

Before the trip, Zhang Ya, a senior CEFC executive wrote to the chairman Ye Jianming on April 24, 2016 about providing Museveni “with $500,000 campaign contributions in cash” and recommended that Ye himself hand over the money in Uganda. CEFC’s chairman ended up not attending Museveni’s swearing in so Patrick Ho was accompanied by other company officials.

The giant energy conglomerate is the 10th biggest company in China and reported $40 billion in revenue in 2014. The cash donation to Gen. Museveni was referred to as a “nice gift” in some of the correspondences between Patrick Ho and the Kutesas, prosecutors allege.

During cross examination of Special Agent Galicia an attorney for Ho, Ben Rosenburg, asked her about an e-mail from Edith Kutesa to Ho. Ms. Kutesa wrote to Ho that her husband advised that when the CEFC team met with Museveni, they should just indicate areas of investment they were interested in.

Detailed discussions would have to wait until a new cabinet was in place. Ho’s lawyer suggested this meant there was no bribe since nothing was offered to CEFC in return for the money they gave the Ugandans.

Ho is also charged with offering $2 million in cash to bribe Chad’s President Idriss Deby to unlawfully obtain lucrative deals in the oil, infrastructure construction, and other industries. A former Senegalese foreign minister Cheikh Tidiane Gadio, who at one time was a defendant in this case, testified against Ho this week.

He said Deby rejected the attempted bribe and that CEFC later sent a letter to make it appear as if the money was a donation to the Chadian people even though the cash was already in Chad.

Referred to separately as the “Chad Scheme” and the “Uganda Scheme,” with timelines with dates, and names of Chadian and Ugandan officials projected on screens for the jurors, prosecutors said the conspiracy started in September, 2014.

This was immediately after Kutesa took up his New York post as President of the United Nations General Assembly.

According to documents shown to jurors Patrick Ho arranged the first of a series of meetings with Kutesa by contacting Arthur Kafeero, his chief of staff at the U.N. The first meeting was held on October 10, 2014.

Some meetings were held in Kutesa’s New York City residence; his son, Isaac arranged some of them, the jury heard. Kutesa also invited Ho to his residence when he hosted a party attended by then U.N. Secretary General Ban Ki-moon, Liberian President Ellen Sirleaf Johnson, Turkey’s prime minister Ahmet Davutoglu, and other leaders.

One meeting, on October 19, between Kutesa, his son Isaac, and Ho, lasted three hours according to Ho’s report to CEFC.
As part of his scheme to solidify relations with Kutesa, Ho asked for an invitation to address an event at the U.N and to appoint Ye, the chairman of CEFC, as Kutesa’s “Special Advisor.”

On December 6, 2014, Ho sent Isaac a message telling him to ask his father to appoint the CEFC chairman Special Advisor.

Kutesa complied with both requests; he invited Ho to speak at the U.N. and appointed his boss to the position.

The Kutesas were invited to China where they met with Ye. Kutesa boasted in his first meeting with Ho that not he had he retained his post as foreign minister but that Museveni, whom he claimed was Uganda’s “first democratically elected president” and a “renowned African leader,” was his brother-in-law.

He told Ho he would be able to quickly arrange a meeting between CEFC executives and Museveni to discuss business ventures.

Jurors also were shown an e-mail message from Edith Kutesa to Ho saying that since Barclays Bank was quitting operations in Africa, CEFC could invest in financial institutions and acquire banks including Crane Bank.

She also proposed negotiations with the central bank, the Bank of Uganda, to link the two countries’ currencies.

Kutesa’s predecessor as President of the General Assembly, John Ashe, was also accused in 2015 of accepting bribes from a Chinese billionaire also funneled through a UN affiliated NGO.

Ashe died in what was reported as an accident while lifting weights at home, alone, before his trial started. Ng Lap Seng, the billionaire charged with bribing Ashe was convicted in 2017 and sentenced to four years in prison.

When Ashe was under investigation, the U.S. Attorney at the time Preet Bharara didn’t respond to inquiries from The Black Star News about whether Kutesa was also being investigated. In October 2015, through a spokesperson, Kutesa told The Black Star Newsthat he and his wife had not been contacted by the U.S. authorities.

But Documents presented in Ho’s trial  show that the Kutesas were under investigation.
Ashe’s predecessor as President of the U.N. General Assembly, Vuk Jeremic, a former Serbian foreign minister, served as a consultant for Ho at a salary of $333,333 after his term expired. He testified earlier this week.