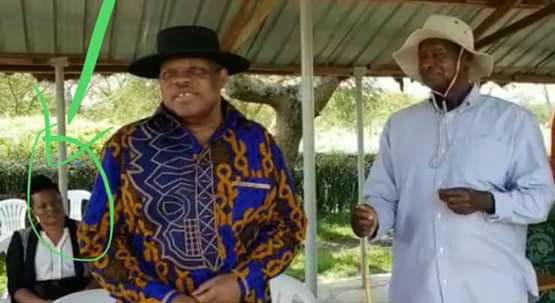 Our Elite Moles reveal that Nantaba, who had spent a long time without having any public appearances with the President, was seen early this week at Museveni’s farm in Kisozi, where he had hosted several people.

Apart from Nantanba, who is also the Kayunga district Woman Member of Parliament, the other people Museveni hosted that day include Congolese singer Kanda Bongo Man, former prime minister John Patrick Amama Mbabazi, who contested against Museveni in 2019, plus several others.

Our Moles reveal that later in the day Nantaba sought audience with the President and by the time she left Kisozi that evening her heart was at peace.

Nantaba, who was dumped as minister in Museveni’s new cabinet reshuffle, is facing charged together with four  police officers, with the murder of Ronald Ssebulime, who was  shot dead on March 24, 2019, along Kayunga Road, allegedly on her orders.

Ssebulime was handcuffed, dragged on the ground and shot twice in the chest. Police responded by arresting four police officers for acting on false assassination alerts by state minister for Information Communication and Technology (ICT), Ida Nantaba.

Investigations commanded by SSP Bernard Muhumuza, revealed that Ssebulime was going to visit his children at St Andrews Kaggwa SS in Mukono. It was unearthed that the deceased was not trailing Nantaba with intent of killing her as she alleged.

Cpl Ssali was charged with murder in April after he recorded an extrajudicial statement in regard to the crime. Ssebulime’s family through their lawyer, Muwada Nkunyingi, have since protested the DPP’s move insisting that they are accomplices in the killing of their relative and must face a full criminal trial.

The trio’s trial was to commence in in June 2019 in the Police Disciplinary Court (PDC) chaired by Denis Odongpiny, but it has since been halted for reasons yet-to-be established.

Police spokesperson, Fred Enanga, said the trial of police constables Ronald Opira, Ronald Baganza and Robert Cherotich, was halted and discussions are on-going with Directorate of Public Prosecutions (DPP) and the police force.

Enanga had earlier told journalists that Opira, Cherotich and Baganza, would be tried disciplinarily because they tried to conceal information on how Ssebulime had been killed by Ssali but could not face criminal trial for crimes committed by their senior.

However, the  DPP later wrote to the police advising that the trio be tried in police disciplinary tribunal since their commander, Cpl Edward Ssali, had confessed to the crime and a ballistic report proved that it was his gun that was used to kill Ssebulime. But the trio has since hit a dead end and the file gone cold.