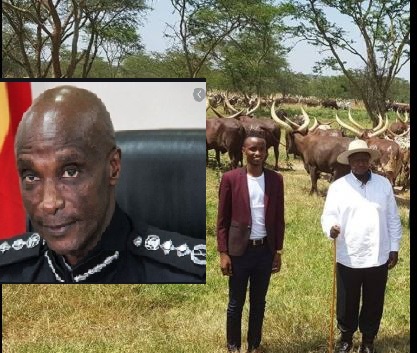 Former Inspector General of Police (IGP) Gen. Kale Kayihura’s blue-eyed boy Blaise Kamugisha, who initially headed the Crime Preventers group that was disbanded by President Museveni in 2018, is back with a bang.

This time round Kamugisha wants to join parliament and sources reveal that he wants to contest for the Western Youth MP seat come 2021.

It is said that after helping the Chieftaincy of Military Intelligence (CMI) to arrest Kayihura’s  in 2018, the young man disappeared to Kenya where he hid for some time, until a top government official resettled him back in Uganda after assuring him of protection and a fat brown envelope.

Immediately after resettlement he opened up an office in Makidye behind Gen. Kasirye Gwanga’s home, and thereafter he registered organisations including Crime Preventers as his own business, and also Proud Pearl Patriots (PPP).

He then started meeting youth especially his old boys from Mbarara, who he convinced that join him, claiming he was spearheading a group advocating for the ‘Muhoozi Project’ and the chief advisor was Andrew Mwanda.

However, it is said that many of the youth who paid subscription fees and contributed  money for the operations of the NGO PPP, after Kamugisha had promised them to reap big, are now crying foul.

He has since resorted to playing pin-pong with the youth whenever they remind him about the promises he made to them or their hard-earned money they injected in PPP.