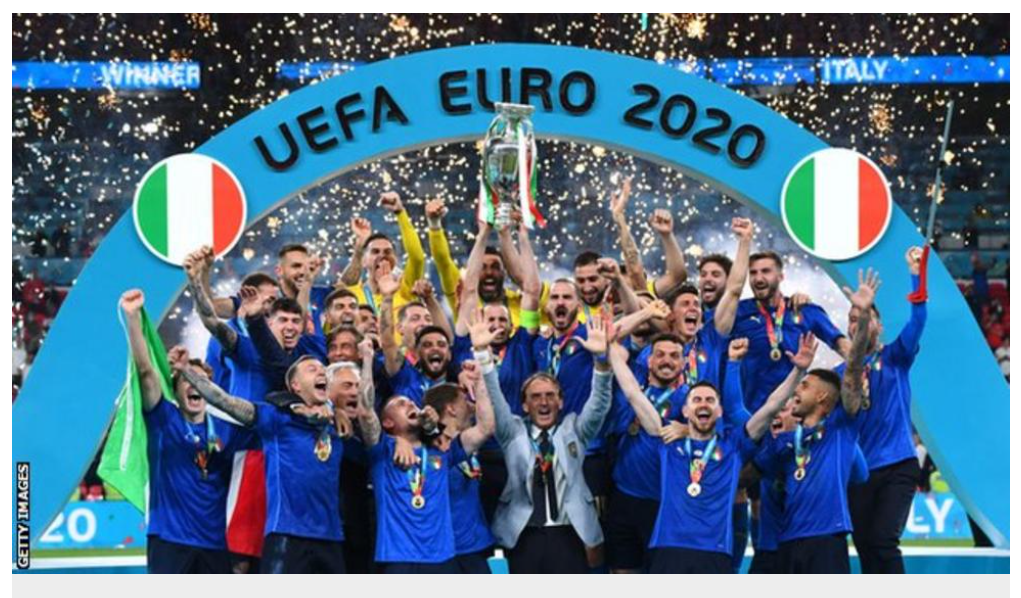 England’s Bid To End Their 55-Year Wait Ended In Agony Of Defeat As Italy Claimed The Euro 2020 Trophy At Wembley.

Italy, unbeaten in 33 matches before this final, slowly edged their way back into the game and were level in the 67th minute when Leonardo Bonucci pounced after England goalkeeper Jordan Pickford turned Marco Verratti’s header on to a post.

And after a tense period of extra time failed to find a winner, it was on to penalties and bitter disappointment for England manager Gareth Southgate and his players, who had gone into this final on a wave of expectation and high emotion.

England missed three of their five penalties, Marcus Rashford hitting a post and Gianluigi Donnarumma denying Jadon Sancho before – so cruelly for such a fine young player – Arsenal teenager Bukayo Saka also saw the giant Italy goalkeeper save his spot-kick.

Harry Kane and Harry Maguire scored for England but, while Pickford kept hopes alive with saves from Andrea Belotti and Jorginho, Domenico Berardi, Bonucci and Federico Bernardeschi scored for Italy.

The tearful 19-year-old Saka, who showed such courage to step forward, was consoled by his team-mates and manager, but there was no real consolation for them or the expectant fans packed into Wembley.

Italy dominated possession, and it was no surprise when they restored parity, then looking the more likely winners as Southgate’s side, so full of running early on, started to labour, particularly after losing the outstanding Declan Rice to a knock.

Italy have won their second European Championship title, and first in 53 years (also 1968); it’s the longest ever gap between championships in the tournament by a single nation, surpassing Spain’s 44-year wait from 1964 to 2008.

England have won just 22% (two of nine) of their major tournament shootouts (World Cup/Euros), the lowest ratio of any European nation to have been involved in three or more.

Italy found themselves trailing in a game for the first time at Euro 2020, while overall they spent 65 minutes behind against England in the final, 21 more than they had been behind in their 33-game unbeaten run (in all competitions) coming into the final (44).
At one minute 57 seconds, Luke Shaw’s opener (his first ever goal for England) was the quickest goal scored in the final of the European Championship, while it was also England’s quickest in the competition overall and the earliest Italy have ever conceded in the competition.
At 34 years and 71 days, Italy’s Leonardo Bonucci became the oldest player ever to score in a European Championship final, and second-oldest for a European side in any major tournament final (World Cup/Euros), after Nils Liedholm for Sweden v Brazil at the 1958 World Cup (35 years, 264 days)